The Big Boyler always has a joke at the ready.

Chris O'Dowd appeared on The Late Show with Stephen Colbert on Tuesday night to discuss his new TV series "Get Shorty".

The Moon Boy star was in flying form and was his usual wise-cracking self along with the host Colbert, who it was revealed, has ties to county Roscommon.

You can watch part of his appearance below.

Video via The Late Show with Stephen Colbert

O'Dowd revealed on Tuesday that he had managed to shoehorn GAA into the conversation.

I'm on @colbertlateshow tonight. Yes, he's smart and funny, no, I didn't match his wit, and yes, I talked about Gaelic football. #HonDaRos 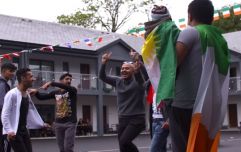 Syrian refugees in Ballaghdereen to feature in Prime Time special

END_OF_DOCUMENT_TOKEN_TO_BE_REPLACED

Of course he did, but we assume that many of the Irish public will have strong feelings about some of his comments on the GAA.

"You probably don't know this but we have the best football team in Ireland... I mean Gaelic Football, which is a sport for... strong men.

"I played a bit because I was tall, which is a big advantage."

Well, Chris is doing two things with this story. He's underselling himself and overselling Roscommon. O'Dowd was a handy goalie back in the day.

But we all know what happened to Roscommon at the weekend in Croke Park so we assume Mayo people, first and foremost, will be queueing to disagree with O'Dowd's claims.

The Big Reviewski || JOE · The Big Reviewski with Y: The Last Man, that Malignant ending & a secret streaming service
popular
It looks like Garth Brooks will play FIVE nights in Ireland after all
One of the most-anticipated movies of the last few years is finally available to watch at home this week
Woman dies after being struck by lorry in Kildare
Gardaí warn of scam involving "inappropriate or sexual images" after young boy blackmailed for money
The film that predicted the pandemic is among the movies on TV tonight
TG4 to air documentary about the Irish woman who shot Mussolini tonight
Body of woman found by walker on shoreline in Galway town
You may also like
3 months ago
Toddler dies after tragic paddling pool accident in Roscommon
4 months ago
Man and woman die in house fire in Co Roscommon
5 months ago
Carlow, Mayo and Roscommon have the lowest percentage of people staying within 10km of home
9 months ago
A woman has died following a three-car road traffic collision in Roscommon
10 months ago
Woman in Roscommon arrested for 80 incidents of ‘theft by deception’ spanning seven years
10 months ago
A man has died following a crash in Roscommon
Next Page