Colin Farrell is one of our favourite actors.

His performance in In Bruges is one of the greatest Irish comedy performances of all time, and we can't wait to see him in Fantastic Beasts and Where to Find Them.

However, he was honoured this week for a role that the vast majority of us didn't even know about - his own sex tape. 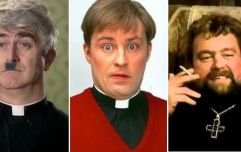 END_OF_DOCUMENT_TOKEN_TO_BE_REPLACED

Gossip blogger Perez Hilton gave Colin Farrell the prestigious award for Best Oral in his sex tape, which was leaked back in 2003.

Commenting on Farrell's "performance", Hilton said "After getting serviced by his then-girlfriend, homeboy returned the favor and performed some cunning linguistics of his own!"

The Big Reviewski || JOE · The Big Reviewski with Andy Serkis, Squid Game follow-ups & the return of Succession
popular
Brian Laundrie: 'Strong probability' remains found belong to missing fiance
QUIZ: Can you name all the countries beginning with L?
Here's the lineup for this week's Late Late Show
WATCH: Micheál Martin and Danny Healy-Rae had an almighty row in the Dáil
How to lower your cholesterol - 5 really handy tips
Socially distanced queues at bar counters expected to be allowed under new guidelines
The cast of Succession on the most ridiculously expensive scene in the show
You may also like
5 years ago
The 15 people that you see in every Irish 5-a-side team
5 years ago
PICS: Emily Ratajkowski was on the pints in Dublin last night
5 years ago
PICS: Adidas have done very well with their retro Man United gear
5 years ago
New Zealand hit by 7.1 degree earthquake off their coast
5 years ago
A shortlist of actors to be the next James Bond has reportedly been leaked
5 years ago
The 15 people that you're guaranteed to meet at every Irish house party
Next Page