Stallone releases the poster for Creed 2 and gives us our first look at Ivan Drago Jr.

Revenge is on his mind...

Nobody was expecting too much from the first Creed movie when it came out, but that is the great thing about hindsight.

Writer/director Ryan Coogler only had one indie film under his belt at the time - the very, very good Fruitvale Station - but he has since gone on to direct Black Panther, the best reviewed movie in the MCU to date. 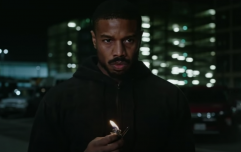 END_OF_DOCUMENT_TOKEN_TO_BE_REPLACED

Critically and commercially it did fantastically, too: 95% on Rotten Tomatoes, and the $35 million production banked over $170 million worldwide.

So, obviously, a sequel was a given.

Hot off the fantastic reviews he's been getting as the layered and intelligent villain of Black Panther, Michael B. Jordan is back as Adonis Johnson, the son of Apollo Creed, the deceased BFF of Rocky Balboa (Stallone, who is also back).

This time, there is a grudge match in the making. Years ago, Rocky had a bit of a Russian nemesis, in the form of Ivan Drago (Dolph Lundgren). Drago is training his son Vitor (played by Florian “Big Nasty” Munteanu, mostly known for a being an actual big time boxer).

Oh, and Ivan killed Apollo in the ring back in the day, so there's a lot of grudges being worked out here.

Coogler won't be back in the director's chair, passing the baton on to relative newbie Steven Caple Jr., but will be staying on in an executive producer role.

Creed 2 is due out in US cinemas in November of this year, and we imagine it won't be too much longer before it makes its way to this side of the Atlantic.

Check out the poster below:

The Big Reviewski || JOE · The Big Reviewski with Ray Liotta, Goodfellas facts & Tom Hanks making us cry
popular
Revolut finally rolls out feature which allows users access wages before payday in Ireland
One of the most-anticipated movies of the last few years is finally available to watch at home this week
Kings of Leon announce first Irish shows in five years
Seven people hospitalised after huge fight at Tuam cemetery
10 years ago this week, the best sports movie ever made was released in cinemas
Derry Girls to come to an end after its next season
Retail billionaire calls on unvaccinated people to be banned from shopping centres
You may also like
4 months ago
Michael B. Jordan's Navy SEAL workout is absolutely brutal
2 years ago
COMPETITION: Win this very cool Creed II poster signed by Michael B. Jordan, Tessa Thompson & Dolph Lundgren
2 years ago
Like it or not, the male harness is new fashion trend of 2019
2 years ago
WATCH: Michael B Jordan's reactions to being told how good looking he is is amazing
2 years ago
WATCH: Sylvester Stallone and Dolph Lundgren watch Rocky IV together
2 years ago
The Big Reviewski Film Club – WIN tickets to a special preview screening of Creed II
Next Page