CULT FICTION: Six reasons why everyone should watch The IT Crowd

We are big fans of the IT Crowd.

Graham Linehan is a bit of a master when it comes to writing sitcoms, but how do you follow Father Ted?

Well, you come along and write something even better.

The show revolves around three staff members in the titular IT department: a geeky genius named Maurice Moss (Richard Ayoade), the work-shy Roy Trenneman (Chris O'Dowd), and Jen Barber (Katherine Parkinson), the department head/relationship manager, who knows nothing about IT.

They are ignored as a department by the company and treated with disdain, but it's when Berry takes over from his father as the head of the company we see some fantastically funny scenes. 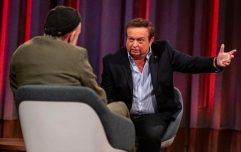 Chris O’Dowd, Aidan O’Shea and more lined up for new RTÉ series, Marty in the Shed

END_OF_DOCUMENT_TOKEN_TO_BE_REPLACED

Moss and Roy get their kicks from putting Jen in awkward situations, hoping her blatant lack of IT knowledge will come to the fore. It doesn't always work out that way though.

The calibre of comedy acting talent in this sitcom is incredible. It's indicative that almost all the cast has gone on to achieve success in other comedies (Berry, Fielding) and on the big screen too (O'Dowd, Ayoade).

The Americans wanted a US version and even filmed a pilot featuring Richard Ayoade reprising his role as Moss. However, even though a full series was ordered, it never made it past the pilot stage.

There is also a German version of the show called Das iTeam – Die Jungs an der Maus (The iTeam – The Boys at the Mouse). It didn't succeed and was canned after just two episodes due to poor viewing figures.

There is a brilliant episode which features Moss being a contestant on Countdown. Moss, of course, is superb at it and becomes an unbeatable champion.

This allows him to become a member of the exclusive 8+ club, reserved for those who have won eight shows or more in a row. The club itself is full of geekish, socially inept brains, which allows Moss to flourish.

The episode culminates in a brilliant 'street countdown' showdown between Moss and his nemesis and it's as ridiculous as it sounds.

It would have to be someone successful, geeky and have the ability to not take themselves very seriously, so we'll give it to Mark Zuckerburg.

The Big Reviewski || JOE · The Big Reviewski with Y: The Last Man, that Malignant ending & a secret streaming service
popular
It looks like Garth Brooks will play FIVE nights in Ireland after all
One of the most-anticipated movies of the last few years is finally available to watch at home this week
Mark Wahlberg and an intense battle are among the movies on TV tonight
Gardaí warn of scam involving "inappropriate or sexual images" after young boy blackmailed for money
Two women seriously injured following three-car collision in Wexford
Woman dies after being struck by lorry in Kildare
The film that predicted the pandemic is among the movies on TV tonight
You may also like
1 year ago
Chris O'Dowd surprises pub goers in Kerry with a lift
3 years ago
WATCH: Chris O'Dowd explains the concept of Gaelic Football to US audiences live on Jimmy Fallon
3 years ago
WATCH: Chris O'Dowd has a message for the people of Roscommon ahead of the Eighth Amendment vote
3 years ago
VIDEO: "This is not something we can stay out of" - Chris O'Dowd urges men to vote Yes on 25 May
4 years ago
#TRAILERCHEST: Aaron Sorkin's first time in the director's chair gives us the tense Oscar-magnet Molly's Game
4 years ago
Chris O'Dowd made some rather controversial claims about GAA on Stephen Colbert
Next Page