CULT FICTION: Six reasons why everyone should watch The Office (UK)

We miss The Office.

Every week we're choosing one TV show that deserves your attention because time is precious and there are some great shows available to watch.

Ricky Gervais' The Office is a masterpiece of comedy that eschewed all conventions of the genre, instead deriving humour from the painful awkwardness of Ricky Gervais' character David Brent, the middle-manager of The Office in question.

END_OF_DOCUMENT_TOKEN_TO_BE_REPLACED

Gervais' timing in delivering Brent's unfunny jokes, uncomfortable overconfidence and pathetic excuses for not doing his job are a masterclass in the art of cringe-porn. At times, it is impossible to know whether you want to laugh or wince yourself to death at just how agonisingly lame David Brent is.

And therein lies the genius of the show. Gervais and his co-writer Stephen Merchant tapped into the most awkward moments of daily life and held them up to a megaphone.

The Office is a mockumentary that follows the life of middle-manager David Brent and the staff beneath him in a dour Slough office.

Brent, a deeply unfunny and uninspiring man, sees himself as an entertainer and a friend to an office full of people who who evidently cannot stand him.

Brent, completely oblivious to this, spends all of his time annoying his employees, getting in the way of the everyday running of the business and reminding you of every uncle you've ever avoided at a family reunion. 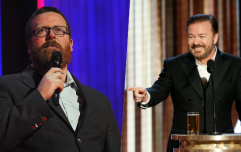 END_OF_DOCUMENT_TOKEN_TO_BE_REPLACED

While it's tempting to compare The UK Office to its American counterpart starring Steve Carell, it bears far more similarities to Gervais' other series, Extras and Derek.

Gervais and Merchant create scenes that allow their characters to scale new heights of awkwardness and Gervais' performance matches the writing to a tee.

Woody Allen, Zach Braff and Michael Cera have perfected the exaggeratedly awkward caricature, but Gervais' David Brent has been taken out of real life and dropped onto the screen. 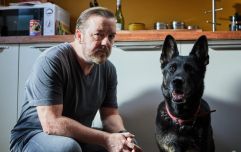 Why you should be watching... After Life

END_OF_DOCUMENT_TOKEN_TO_BE_REPLACED

Writing classic comedy is by no means easy, but to create a comedy of the highest caliber by refusing to write any jokes and instead inviting the audience to laugh at your pathetic, embarrassing and painfully unfunny cast of characters is a different challenge altogether.

Martin Freeman might now best known to audiences as Bilbo Baggins from The Hobbit movies, or for Dr. Watson in Sherlock alongside Benedict Cumberbatch, but The Office was his first major role.

Freeman played Tim Canterbury, a rank-and-file thirtysomething stuck in a dead-end job and too afraid to pursue his ambition of studying psychology. The subplot of the show chronicles his unrequited love for his coworker Dawn and his endless winding up of geek Gareth Keenan.

In the third episode of the show's first season, the gang all go to the annual office pub quiz. The scene is a true-to-life depiction of every pub quiz anyone has ever attended. Plenty of people trying to have a laugh while competitive pub-quiz lifers pathetic squabble and contest every answer that they've gotten wrong.

This episode is the epitome of Merchant and Gervais' observational comedy, taking something that everyone in this part of the world can relate to and showing it through a lens of comedy genius.

Brendan Rodgers, God bless him. The recently unemployed Liverpool manager has a habit of saying exactly the wrong thing in press conferences while completely screwing up his job and alienating everyone who he needs for support. It's almost as if Gervais' David Brent taught him everything he knows.

popular
One of Keanu Reeves' best movies has just been added to Netflix
"Clear as daylight" that unvaccinated people are a risk to themselves and others - Taoiseach
Met Éireann issues Orange weather warnings for five counties ahead of Storm Barra
QUIZ: Do you reckon you can get 15/15 in this General Knowledge Quiz
A terrific crime thriller is among the movies on TV tonight
The JOE Movie Quiz: Week 131
QUIZ: Can you get full marks in this General Knowledge Quiz?
You may also like
11 months ago
QUIZ: How well do you know The Office UK Christmas special?
1 year ago
The ultimate UK Office quiz - Season 1
1 year ago
Ricky Gervais eviscerates pretty much everyone in opening monologue at the Golden Globes
2 years ago
Ricky Gervais has officially finished the script for After Life season two
2 years ago
Ricky Gervais says season two of After Life "should be the best"
2 years ago
Ricky Gervais says people milkshaking politicians "deserve a smack in the mouth"
Next Page