#TRAILERCHEST: The makers of The Conjuring introduce us to a new source of insomnia, The Weeping Woman

Our first look at one of the big horror movies of 2019.

Welcome to #TRAILERCHEST, where we will be looking at the latest trailer for The Curse Of La Llorona.

There's a lot going on The Conjuring universe right now. After the smash hit that was The Nun ($360 million worldwide and counting on a $22 million budget), the next additions are already in production.

Screenwriter Gary Dauberman (IT Chapters 1 & 2, The Nun) is making his directorial debut with Annabelle 3 (due for release in July 2019), which is actually set to feature stars Patrick Wilson and Vera Farmiga, as they make a full crossover from The Conjuring movies.

Meanwhile, there is The Crooked Man movie in pre-production, we're sure there'll be a sequel to The Nun announced any day now, and The Conjuring 3 is also in the works, having landed director Michael Chaves.

He got the gig after how impressed producer (and director of the first two Conjuring movies) James Wan was with The Curse Of La Llorona, which we're getting our first look at now.

La Llorona. The Weeping Woman. A horrifying apparition, caught between Heaven and Hell, trapped in a terrible fate sealed by her own hand. The mere mention of her name has struck terror around the world for generations.

In life, she drowned her children in a jealous rage, throwing herself in the churning river after them as she wept in pain. Now her tears are eternal.

They are lethal, and those who hear her death call in the night are doomed. La Llorona creeps in the shadows and preys on the children, desperate to replace her own. 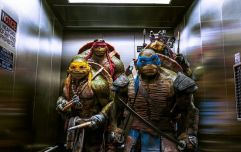 END_OF_DOCUMENT_TOKEN_TO_BE_REPLACED

As the centuries have passed, her desire has grown more voracious…and her methods more terrifying. In 1970s Los Angeles, La Llorona is stalking the night—and the children. Ignoring the eerie warning of a troubled mother suspected of child endangerment, a social worker and her own small kids are soon drawn into a frightening supernatural realm.

Their only hope to survive La Llorona’s deadly wrath may be a disillusioned priest and the mysticism he practices to keep evil at bay, on the fringes where fear and faith collide.

Beware of her chilling wail… she will stop at nothing to lure you into the gloom. Because there is no peace for her anguish. There is no mercy for her soul. And there is no escape from the curse of La Llorona...

Irish release date: TBA, but we'd say it will be around the same time as the USA release of 19 April 2019.


popular
QUIZ: Can you name all the Irish counties just by their shape?
Gardaí arrest woman (40s) in relation to the three children that were found dead in Dublin
PERSONALITY TEST: What percent tosser are you?
PERSONALITY TEST: Which Peaky Blinders character are you?
The JOE Movie Quiz: Week 38
QUIZ: Name the missing word from these famous Dumb and Dumber quotes
Tommy Tiernan's chat with James Leonard about addiction and recovery is genuinely life-changing
You may also like
1 day ago
Tiger Woods, Robin Williams & David Attenborough documentaries on the way as Sky launch two brand new channels
1 day ago
Here are the 6 best movies on TV tonight
2 days ago
What is the best Will Smith movie?
2 days ago
OFFICIAL: Season 6 of Peaky Blinders is now in pre-production
2 days ago
Here are the best films on TV today
2 days ago
The JOE Movie Quiz: Week 38
Next Page