It’s fair to say that this series of Saturday Night Takeaway has been emotional for Declan Donnelly.

Last month, Ant McPartlin was charged with drink driving, following a road traffic accident in London. He subsequently stepped away from his TV commitments, leaving Dec to host the show alone. 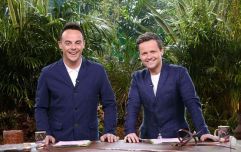 WATCH: Ant and Dec got fairly emotional after their win at the UK National Television Awards

END_OF_DOCUMENT_TOKEN_TO_BE_REPLACED

The current series came to an end on Saturday night, with a special show from Universal Orlando Resort in Florida, with guests Jason Derulo, Denise Richards, and Craig David.

According to Manchester Evening News, after the cameras had stopped rolling, Dec addressed the 1,000-strong audience, thanking them for their support.

“It’s been a fun series. It’s been tinged with sadness,” he told the crowd.

An audience member then shouted out “We miss Ant.”

To which Dec replied “Yes, we do [miss him]. Give a round of applause to Ant who’s back home.”

The Big Reviewski || JOE · TBR Spotlight: Loki - Episode Six - 'For All Time. Always.'
popular
Met Éireann issues weather warning for three counties ahead of arrival of Storm Evert
It’s official, Irish people have one of the best chances of surviving an apocalypse
Gardaí investigating assault allegations after incident in Temple Bar
Dublin cinema named best cinema in all of UK and Ireland
The 50 most iconic songs of all time* have been revealed
Michael D Higgins raises concern over having to consider high volumes of legislation in short time frames
One of the best Westerns ever is among the movies on TV tonight
You may also like
1 year ago
QUIZ: Can you name all 18 previous I'm a Celeb winners in under two minutes?
2 years ago
Ant McPartlin to return to Britain's Got Talent this Friday
2 years ago
I'm A Celeb's Dec responds to claims the show is fixed
2 years ago
Dec will be joined by a new co-host for I'm a Celebrity after Ant drops out
3 years ago
ITV has confirmed that Ant McPartlin will return to the station
3 years ago
Ant McPartlin fined £86,000 and banned from driving for 20 months
Next Page