Spoilers for Derry Girls ahead!

The final episode of Derry Girls season three aired last night, and it proved to be an emotional one for many.

In it, Erin, Clare, Michelle, Orla and James had their hearts set on seeing Fatboy Slim play a Halloween gig in Derry, but after an encounter with some Dubliners in the queue for tickets, it seemed their luck had run out.

END_OF_DOCUMENT_TOKEN_TO_BE_REPLACED

However, after concocting a sob story to tell on TV, Michelle managed to come through with VIP tickets for her gang, and they donned some swan-like angel costumes for the evening and got going.

It was also a special night for Clare. After meeting Laurie, another wee lesbian, in the record shop, she was determined to see her again at the gig.

In the scuffle for Laurie, the group came across Mad Stab, the ringleader of the Dublin gang they confronted, and he ended up getting security to remove the Derry Girls from the venue.

All was not lost, because on the way out Laurie happened across Clare, and told her that she was planning on kissing her that night, which she did, much to the elation of Erin, Michelle, Orla and James. 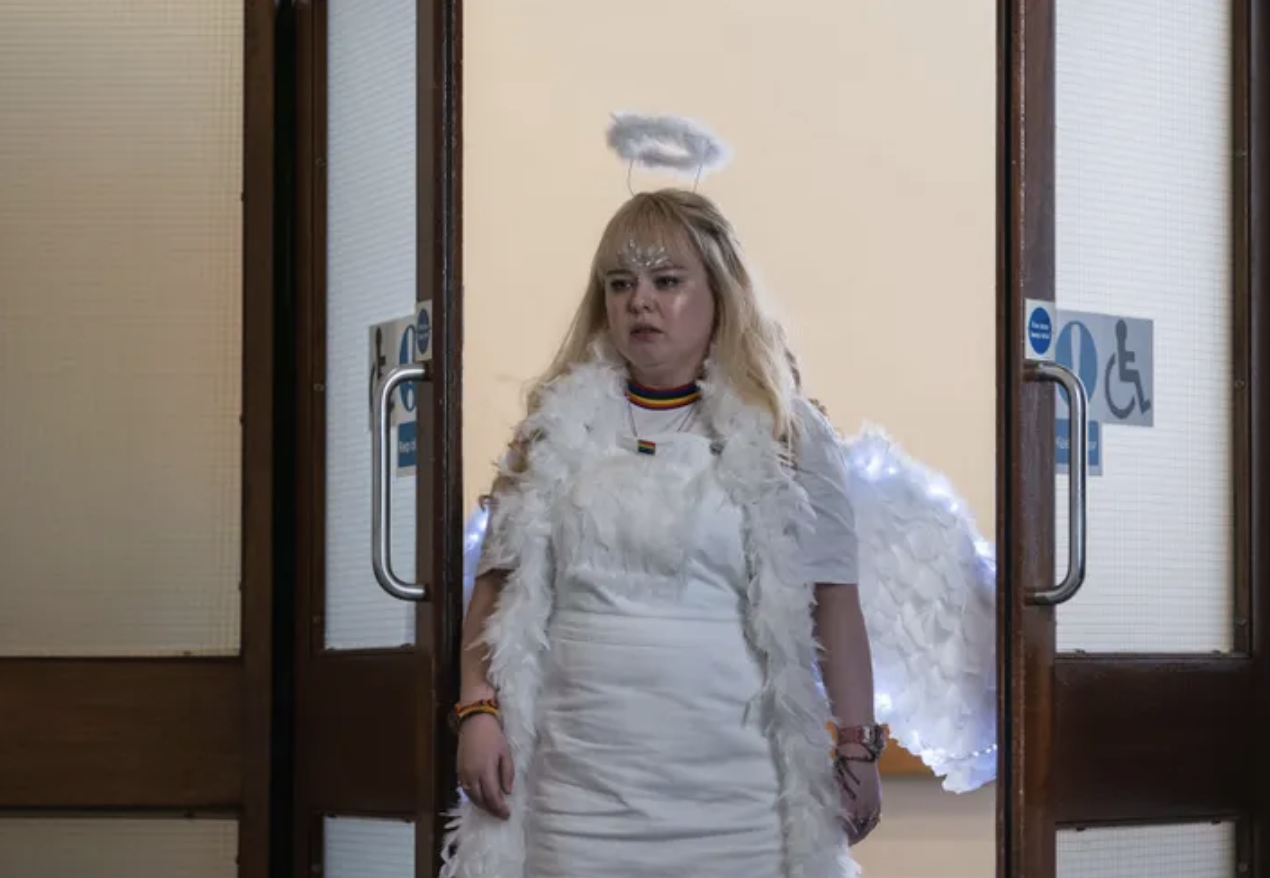 END_OF_DOCUMENT_TOKEN_TO_BE_REPLACED

However, back home, Gerry received a sombre phone call which led him to the venue to deliver some heartbreaking news to Clare.

From there, the episode took a turn, and the group travelled to the hospital where they learned that Clare's dad had suffered an aneurism.

As they waited for their friend in the hospital lobby, Clare came through the doors, and one look was enough to tell them that he had passed away.

What followed was a devastating sequence. The Derry Girls surrounded Clare with their angel wings before we saw them by her side at his funeral.

Fans were, naturally, devastated by the emotional turn the episode took.

me and my family sitting in silence after #DerryGirls pic.twitter.com/Bqjs2iIr5Q

All of them wearing the badges at the funeral and Jenny Joyce reaching out for Clare #DerryGirls pic.twitter.com/XdMk2SwyzB

An hour-long Derry Girls special will air this evening at 9pm on Channel 4.

popular
5 years ago, Hollywood took a massive gamble on a huge sequel... and lost big time
Netflix has just added 12 very big movies to their library
One of the most underrated crime thrillers of recent years is among the movies on TV tonight
Netflix backtracks on anti-password sharing measures following user outcry
Tom Hardy set to play Hannibal Lecter-type serial killer in new series
Guy Ritchie's new war movie looks like it'll be a very emotional watch
The 50 most iconic songs of all time* have been revealed
You may also like
1 day ago
Can you ace this ultimate Brendan Fraser quiz?
1 day ago
Dave Bautista and Jason Momoa's 'Lethal Weapon' style buddy cop movie set to shoot next year
1 day ago
Netflix backtracks on anti-password sharing measures following user outcry
2 days ago
40 years ago, a sci-fi horror with one of the best special effects of all time was released
2 days ago
Irish animation studio to make new episode of Star Wars show
3 days ago
One of the best prison films of all time is among the movies on TV tonight
Next Page