It's fitting that the season finale of Derry Girls involved a talent show because since airing this year, everyone has been bowled over by the remarkable talent of Lisa McGee (creator and writer) and the cast of Derry Girls.

As stated previously, the show was a big winner at the IFTAs and it appeared that the cast and crew were more than happy to share the spotlight with another outstanding Irish comedy, The Young Offenders.

END_OF_DOCUMENT_TOKEN_TO_BE_REPLACED

Elsewhere, Chris Walley (Jock) from The Young Offenders picked up the award for best performance, with Peter Foott winning best director of a comedy or soap.

Here's Lisa McGee and the wonderful Hilary Rose (Máiréad MacSweeney in The Young Offenders) sharing their moment in the spotlight. Well deserved.

In an interview with Ray D'Arcy on RTE Radio 1, Saoirse-Monica Jackson (Erin) and Jamie-Lee O'Donnell (Michelle) have said that the new season of Derry Girls will start filming at the start of October.

When asked about the idea of the show being added to Netflix, O'Donnell said to her co-star: "It's gonna be on Netflix, isn't it? 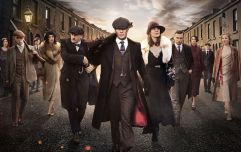 END_OF_DOCUMENT_TOKEN_TO_BE_REPLACED

Here's what Jackson had to say about the idea of Derry Girls being added to the Netflix library.

"Obviously, we'd love to get that trajectory of Netflix and all the rest of it. It would be great for people to be able to watch it all in the one go because it is one of those things that happened so fast. It would be great to watch it consecutively but we'll have to wait and see. It's still up on the Channel 4 player in case you have to see it," she said.

Granted, nothing official has been announced but we saw a similar distribution tactic with Channel 4's other recent comedy hit, The End of the F**king World.

With regards to Season 2, Lisa McGee has previously confirmed that those rumours about Nadine Coyle's appearance in the show are true.

“Yeah I’ve been in contact with Nadine, I’m going to meet up with her in the next few weeks’ she’s a big fan of the show as well. I haven’t even written it yet you know, it’s just one of those things. I am just trying to find stories for the main characters at the minute so I am coming up with those and trying to just find the joy of it again. It was really nice writing that first series so I need to just go back and talk to my friends and find those stories," she said.

END_OF_DOCUMENT_TOKEN_TO_BE_REPLACED

With regards to the plot, during the season finale, McGee's decision to juxtapose the scene of the girls dancing to Orla's step aerobics with the traumatic bombing really resonated with audiences. It appears that the writer will continue to mix the hilarious one-liners with some poignant drama.

"There is loads there, so it just about finding the right ones for series two and what political thing is going to float into it, I might do the ceasefire, I might not, so I am just working through all that at the minute," she said.

popular
Large crowds gather outside Tullamore courthouse as man charged with murder of Ashling Murphy
Amazon Prime Video has quietly added 18 big releases to its library
60 jobs available on Stena Line with 50% of your time spent not working
Here's the line-up for this week's Late Late Show
WATCH: This foul-mouthed argument proves the Irish language is alive and well
Taoiseach says Covid restrictions may be eased earlier than expected
A gripping '90s thriller is among the movies on TV tonight
You may also like
5 days ago
Tim Allen returning for The Santa Clause series on Disney+
6 days ago
Oh, boy! Quantum Leap is officially getting the reboot treatment
6 days ago
Netflix has a new entry in its top 10 most-viewed original shows of all time
1 week ago
COMPETITION: Kick off 2022 right by winning a €200 One4All voucher
1 week ago
The return of a horror icon and 7 more movies and shows to watch this week
1 week ago
QUIZ: Test your knowledge of Gogglebox
Next Page