If you plan on having a lazy weekend in front of the TV while eating a sandwich - preferably not after a nun just died - then a Derry Girls binge session could be just the thing. Since debuting to incredible acclaim, Lisa McGee's heartwarming and relatable comedy has been embraced all over.

In fact, the show's continuing impact was seen on International Women's Day as countless tweets, articles and opinion pieces were dedicated to the likes of Erin, Orla, Clare, Michelle and our own personal favourite, Sister Michael.

END_OF_DOCUMENT_TOKEN_TO_BE_REPLACED

Poor James - or 'the wee English fella' as we all know him - must feel so left out!

If you've never seen Derry Girls before - or if you fancy a quick catch up - you'll be pleased to know that it's currently available to watch on All 4 but it might be disappearing very soon. 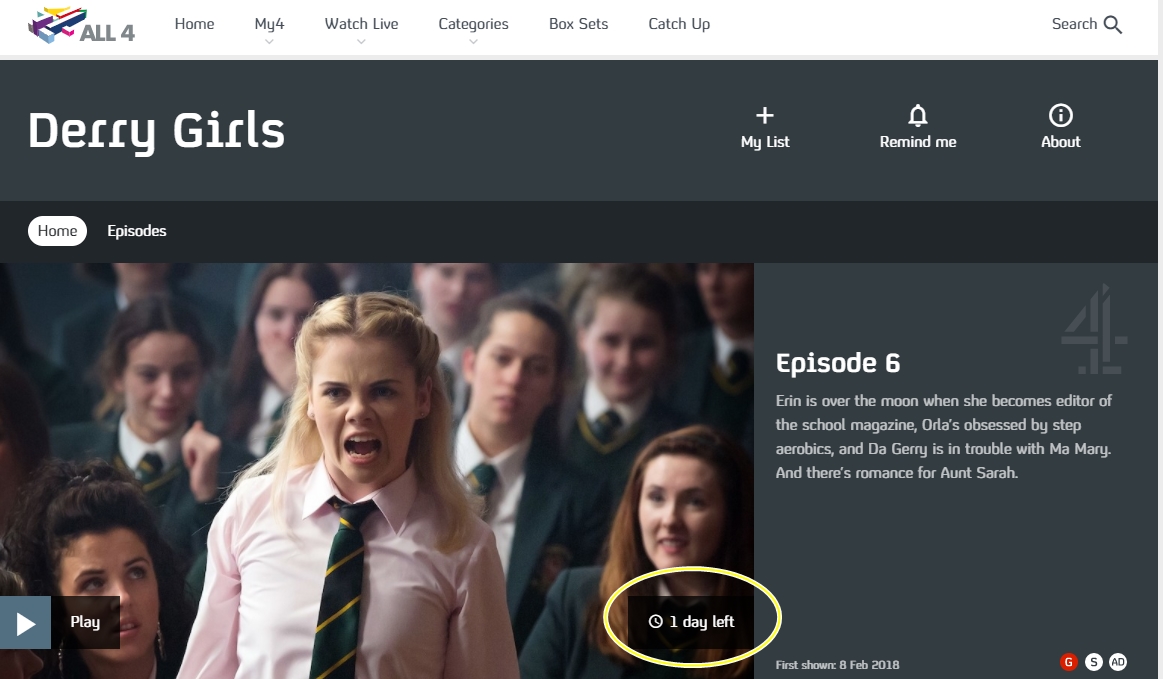 To be fair, Nicola Coughlan (Clare) did warn us that the show might be vanishing but if you fancy a quick reminder of the funniest and most beloved moments, Hat Trick have posted some of the best scenes.

Wise up and give these a watch.

If you wanna binge watch #DerryGirls on your snow day I’m into that, also it’s only on All 4 for 8 more days so get it while you can ❤️ https://t.co/8bL7uoNtYc pic.twitter.com/io2uIZGnzS

The memorable scene when Claire came out to Erin.

The deadpan moment when Sister Michael confirmed her status as one of the finest comedy characters in years.

"Then why were you pissing on her and making sandwiches?" Superb.

Proof that sleep deprivation, perno and a delusional personality can be a religious experience that even 'Big M' would approve of.

House of Rugby Ireland · Ireland's feel-good win, Casey's initiation song, scrapping Sexton and Scott Williams interview
popular
Eoghan McDermott to leave RTÉ after six years (Report)
One man has been charged following Limerick street party, 50 FPNs issued
Sony are giving away a free game to all PS4 and PS5 owners
WATCH: Colin Farrell is in deep trouble in deep space in the first trailer for Voyagers
€17,500 worth of cocaine found at street party in Limerick
Turns out one of WandaVision's biggest solved mysteries hasn't actually been solved yet
One of the most fertile men in Ireland is a guest on tonight's Claire Byrne Live
You may also like
4 days ago
QUIZ: Can you name all of these characters from The Rugrats?
6 days ago
The Tommy Tiernan Show extended by six weeks
6 days ago
The full list of all the new shows and movies coming to Netflix in March
1 week ago
WATCH: Invincible looks like The Boys meets Rick & Morty
1 week ago
Derry Girls Season 3 to begin filming later this year
5 days ago
WATCH: Netflix releases first trailer for Zack Snyder's Army Of The Dead
Next Page