Derry is already a city full of landmarks but the tour features a Derry Girls twist - taking visitors to sites such as the iconic Derry Girls mural and Dennis' Wee Shop. Visitors will also explore Long Tower Church where the "Miracle of Our Lady" occurred. 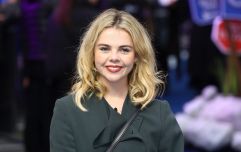 END_OF_DOCUMENT_TOKEN_TO_BE_REPLACED

The tour does include an educational element, as visitors will be brought to landmarks such as the Free Derry wall and Guildhall, where Bill Clinton spoke in 1995.

The hotel is also running a menu inspired by the show. It features a cream horn, a cone of chips, the famous Derry sausage roll baps, a classic Tayto Cheese and Onion crisp sandwich and a cocktail.

The hotel has also been decorated with a large fibreglass artwork with a Derry Girls uniform, curly brown hair and hooped earrings, just like the character Michelle from the sitcom, only, in this case, it's a large rubber duck.

The package, which includes an overnight stay at the Everglades Hotel, afternoon tea and the walking tour is from €115 per person sharing.

If you'd prefer to not bother with the walking tour, the package is available without that element for €96 per person, while afternoon tea by itself is €36.

popular
120 person wedding party in Longford was "very disappointing", says Pavee Point Co-Director
Here's the lineup for this week's episode of The Late Late Show
Simon Harris condemns "downright stupid" comments about student PUP payments
Joe Duffy listener complains of being quoted €4,100 for three-night hotel stay in Kerry this summer
Irish Government hits back after reports UK authorities will ban Troubles-era prosecutions of British soldiers
Netflix's new thriller Awake puts us in a world where people can no longer sleep
Lidl to sell Covid-19 antigen tests for €24.99 per pack
You may also like
2 months ago
Derry Girls Season 3 to begin filming later this year
4 months ago
Irish acting legend Colm Meaney would "love to do a cameo" in Derry Girls
8 months ago
Derry Girls creator reveals that plans are in motion for a Derry Girls movie
9 months ago
An official Derry Girls book is coming out this year
9 months ago
It looks like a Derry Girls movie is indeed on the way, according to creator Lisa McGee
11 months ago
Chernobyl leads this year's BAFTA nominations, Derry Girls up for best comedy
Next Page