There are a lot of big screen releases we recommend over the next month, and chances are you'll want to watch them all.

END_OF_DOCUMENT_TOKEN_TO_BE_REPLACED

If you haven't heard of it yet, the MyOmniPass from Omniplex Cinemas entitles subscribers to one ticket to every standard movie, 10% off your cinema goodies, 10% off any extra tickets purchased online for your friends, free upgrades of MyOmniPass tickets to the MAXX and Recline shows, and exclusive screenings just for MyOmniPass members.

So, yeah, you'd get to see all eight of these movies for less than €20 a month!

Disney and Pixar are going the magical route, as two brothers (voiced by Tom Holland and Chris Pratt) discover a wizard's staff that will reunite them with their dead Dad for a limited amount of time. The voice cast also consists of Julia Louis-Dreyfuss (VEEP, Seinfeld) and Octavia Spencer (Hidden Figures, The Help), and the plot - which sounds like an animated version of About Time - is almost definitely going to make us cry.

END_OF_DOCUMENT_TOKEN_TO_BE_REPLACED

Vin Diesel is taking on another comic book character, although admittedly this one isn't nearly as famous as one of the members of the Guardians Of The Galaxy, but it is A LOT more violent. He plays a "murdered" soldier who is injected with a serum that gives him Wolverine-esque regenerative powers, but instead of being happy about it, he decides to kill all the soldiers and army folk who used him as a guinea pig.

Barry Keoghan, Niamh Algar, and Cosmo Jarvis star in this tense, dark drama about the heavy of a gang (Jarvis), who is trying to get his life back on the straight and narrow so he can spend more time with his son and his ex-girlfriend (Algar), but the pull of the gang's leader (Keoghan) keeps him from being the good man he wants to be. 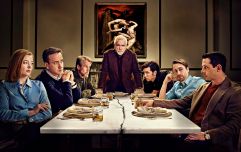 END_OF_DOCUMENT_TOKEN_TO_BE_REPLACED

Already a massively controversial thriller - mostly because Donald Trump has been tweeting about it, resulting in it briefly being pulled from release schedules entirely - deals with the story of a group of random people who find themselves involved in being hunted by the rich and bored. Expect some serious think-pieces on this one when it arrives.

John Krasinksi is back to direct the sequel to the hit low-volume horror, as is his real-life wife Emily Blunt, who is attempting to bring her children to a safe zone, through the alien-infested streets of America, before crossing paths with Cillian Murphy. Not too much more about the plot is known, but from the early trailers we do know that it will be suitably terrifying.

Easter break is practically upon us, and family films will be the order of the day. James Corden returns as the titular bunny, who decides to run away from home in an act of defiance after Rose Byrne and Domhnall Gleeson get married and start giving him less and less attention. Margot Robbie, Daisy Ridley, and Sia all chip in on the impressive voice cast list.

Ireland dips its toe into the world of sci-fi/horror, as Jesse Eisenberg (The Social Network) and Imogen Poots (Green Room) are the happy couple who go house-hunting and find themselves in the middle of a suburbian estate with apparently no way out.

The latest in the animated-classic-gets-a-live-action-makeover from Disney, but this one does seem to be taking an epic route, following as much in the footsteps of their own Eddie Murphy-as-a-dragon original as it does the likes of Crouching Tiger Hidden Dragon.