"I want to say I am so sorry to the people that were affected."

Ellen DeGeneres has addressed the allegations that her television show was a toxic workplace, and that some employees faced racial discrimination and intimidation while working on the show.

In the opening monologue on the first episode of Season 18 of her show, Ellen apologised and said that she takes responsibility for what happened. 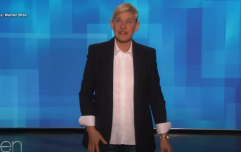 END_OF_DOCUMENT_TOKEN_TO_BE_REPLACED

She started by jokingly saying: "How was everybody's summer? Good? Mine was great. Super terrific."

She continued: "As you may have heard, this summer there were allegations of a toxic work environment at our show and then there was an investigation. I learned that things happened here that never should have happened.

"I take that every seriously and I want to say I am so sorry to the people that were affected. I know that I am in a position of privilege and power and with that comes responsibility and I take responsibility for what happens at my show.

"I'm committed to making this the beat season that we have ever had."

Take a look at a clip of Ellen's comments here:

The Big Reviewski || JOE · The Big Reviewski with Andy Serkis, Squid Game follow-ups & the return of Succession
popular
Ryanair is seeking applicants for "the worst job in Ireland"
The JOE Movie Quiz: Week 124
Gardaí investigating after man robs hotel at knife point in Kerry
QUIZ: Can you master this General Knowledge Quiz?
The JOE Friday Pub Quiz: Week 265
Investigation launched after window smashed at Canada Goose store in Dublin
The 10 best insults from the first two seasons of Succession
You may also like
2 years ago
No Ellen, it's not okay to be friends with George W. Bush (or: How I Learned To Stop Trusting Celebrities)
2 years ago
WATCH: Ellen DeGeneres defends herself after attending NFL game with George Bush
2 years ago
Ellen DeGeneres speaks out about her sexual abuse in new Netflix series
2 years ago
WATCH: Ellen DeGeneres called the Oscars to try and convince them to reinstate Kevin Hart as ceremony host
2 years ago
WATCH: Netflix release trailer for Ellen DeGeneres' stand-up comedy special
3 years ago
WATCH: Hozier stole the show with his rendition of 'Nina Cried Power' on Ellen
Next Page