One of the biggest scandals in recent memory.

My friend messaged me after watching part one of Whistleblower: The Maurice McCabe Story and said: "It's so good, you should watch it. I didn't know half of what was going on."

A lot of people are likely to have a similar feeling after watching the documentary. 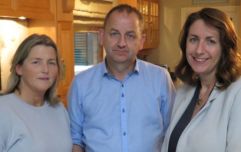 END_OF_DOCUMENT_TOKEN_TO_BE_REPLACED

We saw following the first part on Monday that it was being watched by the masses, when RTÉ revealed the viewing figures, and they were simply staggering.

But, Tuesday night's concluding episode of Whistleblower: The Maurice McCabe Story was watched on RTÉ One by an even larger audience of 555,000 (average) with a 44% share.

And, as we wrote earlier, there was a big reaction to it as well.

McCabe found himself at the centre of a national scandal when he was targeted by unfounded allegations by powerful Gardaí after he tried to expose corruption within the force.

The Whistleblower documentary, which is presented by journalist Katie Hannon, is the first time and McCabe and his wife Lorraine have sat down to tell their side of the story to the public.

It's available to watch on the RTÉ Player if you missed it on Monday and Tuesday.

popular
Woman killed in Clare crash named as Peggy Twomey, mother of Marty Morrissey
Amazon Prime Video has quietly added 8 big new movies to its library
These are the most generous counties in Ireland, according to GoFundMe
Man in his 70s dies following two vehicle collision in Galway
Every child in Direct Provision will get a Christmas present this year following fundraiser
Schools and third level institutions to remain closed in counties affected by orange or red weather warnings
A fun action flick with Nicolas Cage is among the movies on TV tonight
You may also like
3 years ago
RTÉ to air two-part documentary about Sergeant Maurice McCabe
3 years ago
Reports suggest Garda Superintendent David Taylor has been suspended from duty
3 years ago
Looking for answers inside the arena of the Disclosures Tribunal
4 years ago
Play the world's smallest violin for Frances Fitzgerald
5 days ago
Here are all the movies on RTÉ this Christmas
5 days ago
COMPETITION: Just in time for Christmas, we've got a €200 One4All voucher to give away!
Next Page