August 1997. Truth be told, not a classic month for cinema.

There was the terrible "adult" superhero movie Spawn, mad-as-a-bag-of-hammers Mel Gibson / Julia Roberts thriller Conspiracy Theory, Demi Moore telling people to "suck my dick" in G.I. Jane, and someone told Shaquille O'Neal he was capable of acting in Steel...

All round, not great. However, from the depths of that durge came another movie which, at the time, was also seen as an absolute steaming pile of flop, having been savagely ripped apart by critics and roundly ignored by audiences, but in the 25 years since has amassed a cult following quite unlike any other horror going.

We talk, of course, of Event Horizon. 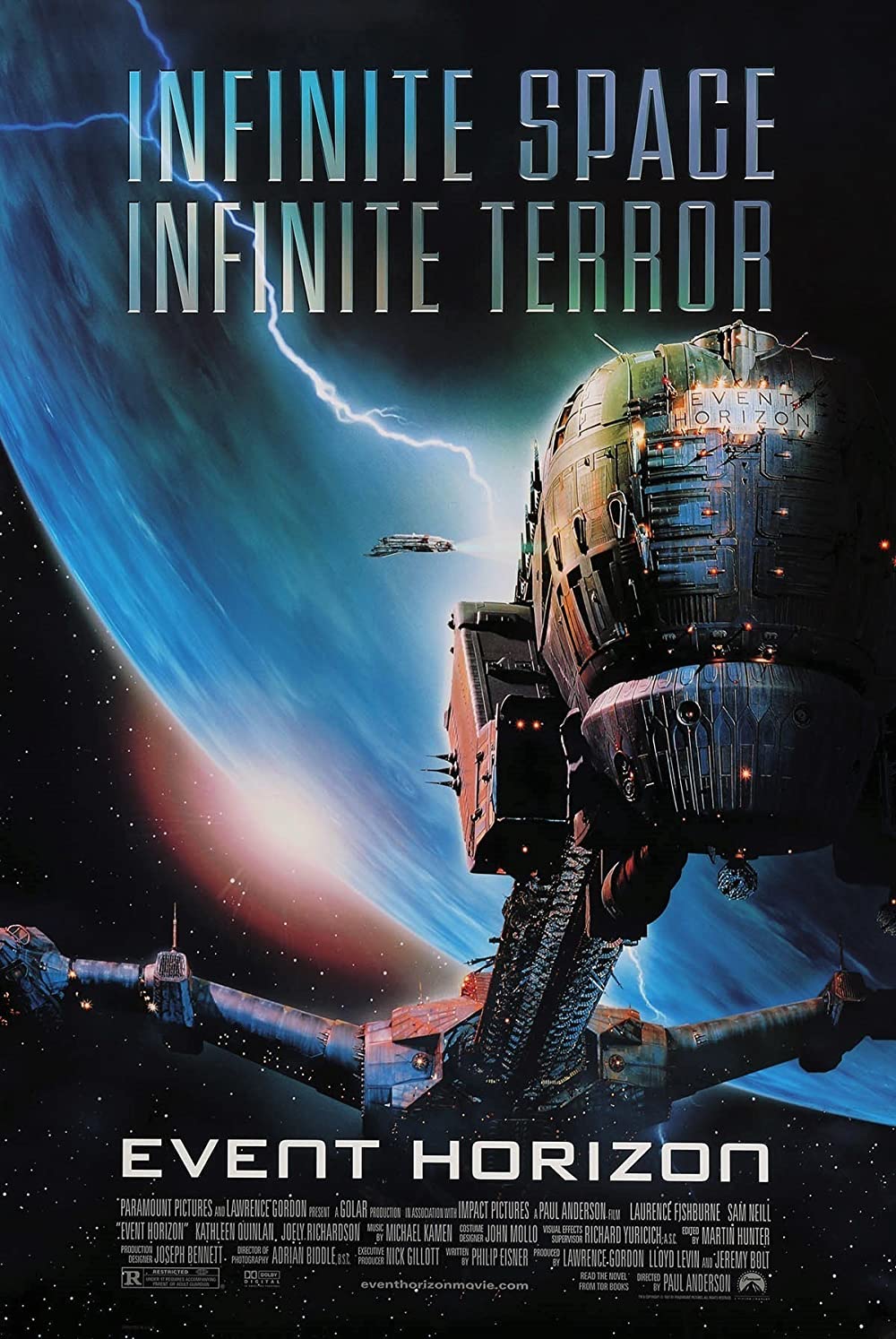 END_OF_DOCUMENT_TOKEN_TO_BE_REPLACED

With a pretty impressive cast of great character actors including Laurence Fishburne, Sam Neill, Joely Richardson, Jason Isaacs and Kathleen Quinlan, the film was budgeted at $60 million - which is A LOT for a horror movie in 1997 - and it only made $26 million back in the U.S. box office.

On top of that, the film stands with a score of just 29% on Rotten Tomatoes, and some of the review quotes are real doozies:

END_OF_DOCUMENT_TOKEN_TO_BE_REPLACED

"If I were a psychologist hired to analyse the people who made this, I would conclude that everyone involved needed to take their inner child out back and shoot it." - Cinemaphile.org

"You look at Event Horizon as you would something that fell out of someone's nose." - Film Freak Central

"If you want to have that Event Horizon experience without spending the seven bucks, try this instead: Put a bucket on your head. Have a loved one beat on it vigorously with a wrench for 100 minutes. Same difference, and think of the gas you'll save." - Washington Post

END_OF_DOCUMENT_TOKEN_TO_BE_REPLACED

The film was directed by Paul W.S. Anderson, who had previously directed the live-action adaptation of Mortal Kombat, and claimed that he turned down directing the sequel to that movie, as well as turning down Alien: Resurrection and the first X-Men movie, to make Event Horizon instead.

In the years that follow, Anderson would go on to direct Alien VS Predator (terrible), Pompeii (terrible), Death Race (actually better than you remember), The Three Musketeers (terrible), Soldier (one of the biggest flops of all time, terrible), and no less than FIVE Resident Evil movies (almost unanimously terrible).

However, unlike pretty much everything else in his CV to date, only Event Horizon has been given something of a second chance in the years since it was released.

The one-line description of Event Horizon is "The Shining in space", which is actually pretty apt. A spaceship is capable of travelling through a particular dimensional portal goes missing for a number of years, but then returns one day without warning... but seems to have come back imbued with an evil sentience.

This is a pretty high concept idea, and Anderson manages to pull it off admirably, right up to the gore-heavy final act which has Doctor Grant from Jurassic Park pull his own eyes out, and then somehow put them back in.

Before he had even finished filming, the folks at Paramount were cutting back on the amount of time Anderson had to edit the finished movie, as they would not budge from the release date of August 1997. They wanted a hit in their pocket before they released Titanic, which at the time was scheduled for release in September 1997 (eventually pushed back to December), and they were convinced that massively expensive romantic disaster film was going to be a major loss for them.

This resulted in Anderson delivering a rush-job on the first cut - coming in at 130 minutes - and early test screenings had audience members reportedly fainting at the amount of violence, which - if the current cut is anything to judge against - is almost understandable...

Paramount demanded cuts be made, and with everyone's back against the walls, the final product runs at 95 minutes, which Anderson was reportedly very unhappy with.

When the film was released to poor reviews and bad box office, Paramount blamed Anderson, Anderson blamed Paramount, and the world continued turning.

However, a funny thing happened... as does often happen with films that aren't properly appreciated initially, it happened with everything from Anchorman to The Shawshank Redemption... Event Horizon became a massive success on home video.

When this happened, Paramount returned to Anderson and requested a "director's cut" of the film, only to discover that the fully-finished-but-edited-out 35 minutes of the movie had been improperly stored (in an abandoned Transylvania mine, no joke!), and subsequently had become entirely too damaged to be usable for a new edit to take place.

Despite all that, Event Horizon still holds up to this day, and what it lacks in originality - aside from The Shining, you can't help but also see shades of Alien and Hellraiser - it more than makes up for with visceral horror and the kind of unique aesthetic you just don't see anymore.

That cathedral-like abandoned ship, the massively creepy "core", the truly chilling score playing out over the whole thing, the great cast treating the film with the respect it deserves, and a level of mind-bending violence that, even when scaled back, that is still above and beyond the levels most major horror movies shy away from.

25 years on, Event Horizon is definitely worth another look. Do you see?

You can see, because Event Horizon is available to watch on Netflix right now.

Clip via FilmTrailersChannel & Horror On Screen