Everybody loved Uncle Colm on this week's Derry Girls

Following a huge response to the new Irish TV show of the moment, the sensational Derry Girls has been commissioned for a second series by Channel 4 after just one episode.

The series follows six teenagers Erin, Orla, Clare, Michelle and Michelle’s tag along English cousin – aka The Wee English Fella – James, as they deal with teenage life in 1990s Derry.

Episode two introduced us to a whole new set of characters including Fionnuala the local chipper owner and Uncle Colm, who took the nation by storm.

Main character Erin's grand uncle told his tale of being kept hostage by balaclava-clad men to an extremely bored audience – which only spurred the nation's conversation regarding ''we all know an Uncle Colm.''

Uncle Colum has to be a Magherafelt man! #DerryGirls

Pissing myself at Colm telling his story. #derrygirls 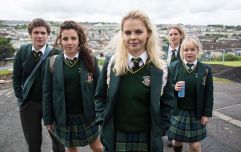 END_OF_DOCUMENT_TOKEN_TO_BE_REPLACED

Uncle Colm was portrayed by veteran Irish comedian Kevin McAleer who was the original casting preference for the role of Dougal on Father Ted.

McAleer was once said to have put the “dead” back into “deadpan”, thanks in no small part to his signature act: delivering stories in a drawling Tyrone accent. He came to prominence on Irish comedy series Nighthawks in the late 1980s and early 1990s.

His accurate depiction of the relative-who-doesn't-know-when-to-shut-up struck a chord with Irish audiences on Thursday night with talks to Electric 7s and wee men with balaclavas.

A class act and an even better casting decision.

House of Rugby Ireland · Ireland's feel-good win, Casey's initiation song, scrapping Sexton and Scott Williams interview
popular
Eoghan McDermott to leave RTÉ after six years (Report)
One man has been charged following Limerick street party, 50 FPNs issued
Sony are giving away a free game to all PS4 and PS5 owners
Turns out one of WandaVision's biggest solved mysteries hasn't actually been solved yet
The 50 most iconic songs of all time* have been revealed
One of the most fertile men in Ireland is a guest on tonight's Claire Byrne Live
Two men arrested in Gardaí probe into bogus tradesmen
You may also like
7 months ago
An official Derry Girls book is coming out this year
7 months ago
It looks like a Derry Girls movie is indeed on the way, according to creator Lisa McGee
8 months ago
Chernobyl leads this year's BAFTA nominations, Derry Girls up for best comedy
10 months ago
QUIZ: Can you beat this Derry Girls expert's score on Mastermind?
1 year ago
Derry hotel launches a Derry Girls walking tour and menu
1 year ago
QUIZ: How many of these Derry Girls characters can you name?
Next Page