25 years ago, Denzel Washington's most underrated movie was released

Those who watch it will never listen to a particular Rolling Stones song the same way.

In 2020, the New York Times named Denzel Washington the greatest actor of the 21st century so far, and to be fair, it is a choice that is hard to argue with.

After all, the outlet's critic A.O. Scott is correct when calling the two-time Oscar winner "a screen titan who is also a subtle and sensitive craftsman" and when pointing out that the actor has both "serious old-school stage training and blazing movie-star presence".

END_OF_DOCUMENT_TOKEN_TO_BE_REPLACED

Washington is a performer that is able to take a character who could feel archetypal or stereotypical on a page and make them feel like a complex, fully-fleshed out, lived-in person, oftentimes just through sheer magnetism and compelling line delivery.

It's on account of these skills that he boasts such an incredible filmography full of classics including Crimson Tide, Devil in a Blue Dress, Fences, Inside Man, Malcolm X, Man on Fire, Training Day and Unstoppable.

With all that said, not every one of his movies has been a hit with both audiences and critics, such is the case with 1998's Fallen.

END_OF_DOCUMENT_TOKEN_TO_BE_REPLACED

Noteworthy for being the only supernatural film to feature Washington, it sees the actor play Detective John Hobbes, a good, hard-working cop in Philadelphia who lives with his brother, Art (Gabriel Casseus), and the latter's son, Sam (Michael J. Pagan).

In the movie's opening scene, we witness Hobbes visit a serial killer on death row who he helped capture named Edgar Reese (a scene-stealing Elias Koteas). Before he is executed, Reese acts erratically, ranting in a foreign language and singing The Rolling Stones' version of the track 'Time is On My Side' at the top of his lungs.

However, after Reese's death, more killings are committed bearing the serial killer's M.O. as Hobbes' begins to notice people around him acting strangely, sometimes singing the same song. It soon becomes clear that the murders and bizarre occurrences are the work of an ancient demon that is able to jump into people's bodies and possess them.

And as the malignant force seems to take joy in making Hobbes suffer, the detective turns to a professor of religion (Embeth Davidtz) for help in protecting his family.

END_OF_DOCUMENT_TOKEN_TO_BE_REPLACED

Bearing similarities in story and tone to Stephen King's recent novel The Outsider, which itself was adapted into an excellent HBO show, Fallen boasts a terrific premise that is solidly executed.

While it does suffer slightly from the audience oftentimes being two steps ahead of the lead character in terms of recognising the supernatural threat, as well as maybe having one too many scenes of exposition, I'd argue that its strengths more than makeup for its flaws.

For one, it's easy to see why Washington - well-known for being a devout Christian - would be drawn to the screenplay by Oscar nominee Nicholas Kazan (Reversal of Fortune) which blends blockbuster thrills with an exploration of theological concepts.

Speaking about this while promoting the film, the actor said: "Every society, every religion throughout time has another interpretation of that same thing, yin and yang, good and evil, god and the devil.

"Some people say the devil is called 'd-evil' and God is one letter short of good... It seems to be that they have to co-exist.

"This is fiction but it does pose those questions. Why are we here? [My character] does ask: 'What's the point of life?'" 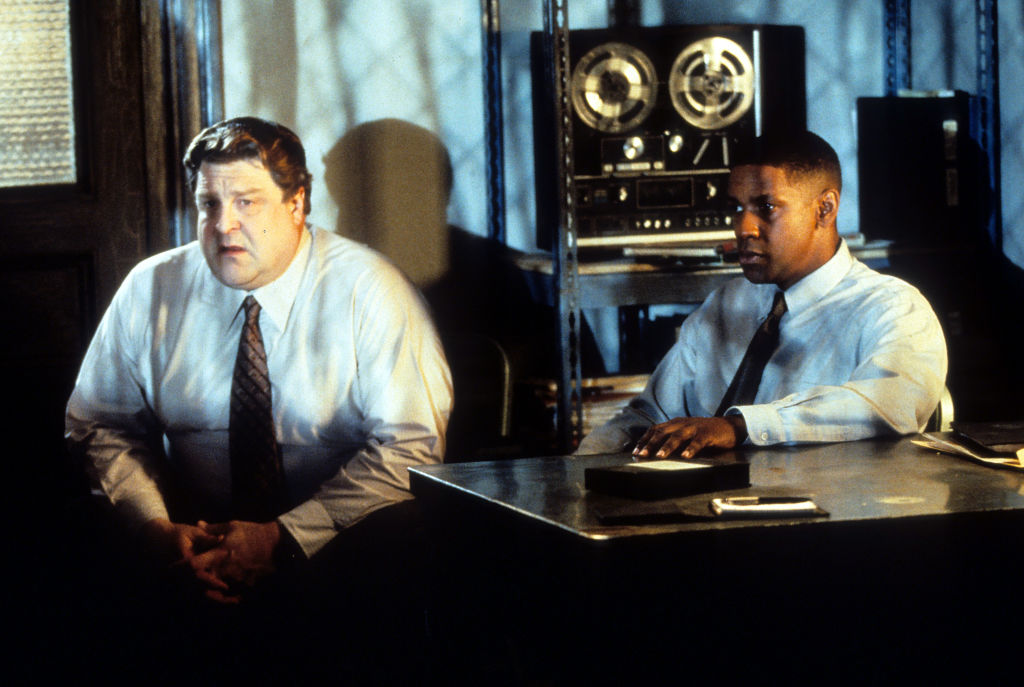 On top of this, Kazan does impressive work making the world of Fallen and the way its characters interact - particularly Hobbes and his best friend and fellow cop Jonesy (John Goodman) - feel authentic and realistic.

As such, we actually are invested in and care about the characters by the time the movie takes a turn for the more fantastical.

Also, the film's use of voiceover is pretty ingenious. It plays off the cliche of the narrating detective character in a noir movie - Fallen's first lines are delivered by Washington where he recounts to the viewer: “I want to tell you about the time I almost died” - before ultimately subverting it in the finale.

Plus, the central idea of a demon that can bounce between bodies is incredibly cinematic, resulting in a handful of very creepy and suspenseful scenes.

This includes the one below in which Hobbes' colleagues at his police station - including a pre-Sopranos James Gandolfini! - become possessed one by one and taunt the detective.

In fact, Fallen is very handsome looking in general, with director Gregory Hoblit (Primal Fear) and his cinematogapher Newton Thomas Sigel (Drive) experimenting with lenses, film stock and film processing to give the movie a shadowy, otherworldly feel.

Speaking on the DVD commentary, its producer Charles Roven explained: "We used a printing process that is called ENR to actually make the blacks deeper and richer and which also serves to neutralise or thin out other colours - the reds, the yellows, the greens."

Coupled with all this in Fallen is a truly surprising denouement and a typically commanding performance from Washington.

In terms of the latter, the actor makes the viewer instantly like and trust Hobbes as this honest cop, while also convincing as the walls begin to close in on the character and he becomes more desperate and tested by the demon. 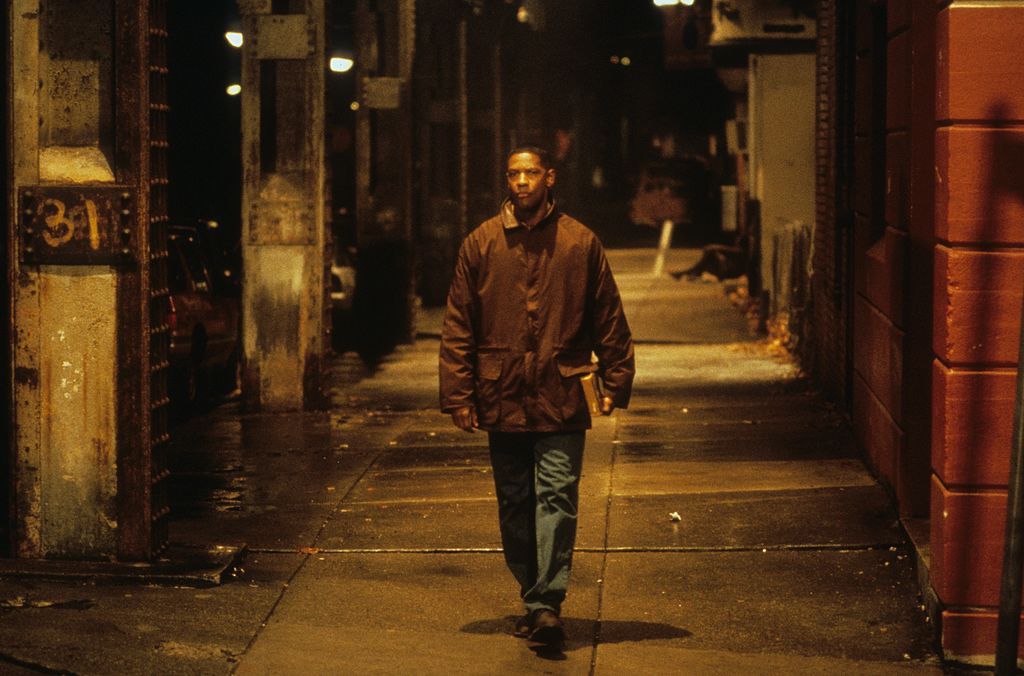 All that said, Fallen was not a hit for the most part with critics, currently holding a lowly 40% score on Rotten Tomatoes

Some reviewers criticised its two-hour-plus runtime, its dark tone and its attempted blending of a cop drama and a supernatural thriller.

However, based on its 7.0 score on IMDB, many of those that did see the film liked it.

Plus, in an age now of endless franchises and superhero movies - when an adult-minded, mid-budget, supernatural thriller with weighty ideas and A-list actors coming out in a cinema would be a real rarity - films like Fallen should be cherished as a godsend.

Fallen is available to stream on Prime Video in Ireland now.

popular
Netflix has just added 12 very big movies to their library
5 years ago, Hollywood took a massive gamble on a huge sequel... and lost big time
One of the most underrated crime thrillers of recent years is among the movies on TV tonight
Netflix backtracks on anti-password sharing measures following user outcry
Tom Hardy set to play Hannibal Lecter-type serial killer in new series
The 50 most iconic songs of all time* have been revealed
The JOE Friday Pub Quiz: Week 332
You may also like
21 hours ago
Can you ace this ultimate Brendan Fraser quiz?
1 day ago
Dave Bautista and Jason Momoa's 'Lethal Weapon' style buddy cop movie set to shoot next year
1 day ago
Netflix backtracks on anti-password sharing measures following user outcry
1 day ago
40 years ago, a sci-fi horror with one of the best special effects of all time was released
2 days ago
Irish animation studio to make new episode of Star Wars show
3 days ago
One of the best prison films of all time is among the movies on TV tonight
Next Page