There. Are. Spoilers. Here.

"Pizza, steak... I mean I pretty much consumed anything." Jason Momoa on his Khal Drogo Game of Thrones diet

END_OF_DOCUMENT_TOKEN_TO_BE_REPLACED

Now that the Battle of Winterfell is over, it appears that the focus of the remaining three episodes will be firmly on the war for the Iron Throne as Cersei Lannister faces the combined threat of Jon Snow and Daenerys Targaryen.

Granted, that alliance is currently on shaky ground after Dany discovered that 1) Jon is the true heir to the Iron Throne, 2) he's her biological nephew, but it seems that after the recent war against the dead in The North, the attention will now shift to King's Landing.

However, as soon as Arya Stark delivered the fatal blow to the Night King in the Winterfell Godswood, fans of the show had questions. Questions that one Redditor has sought to answer with a fan theory arguing that the The Long Night "makes perfect sense."

The thesis: Only someone unknown to the Night King will be able to kill him. Big NK is aware the only way to defeat the dead is to kill him, he wouldn't allow that to happen by risking his safety. He parks Drogon outside the Gods' Wood, he only intervenes in the battle when dragons are torching his dead bois to death and opts to surround Jon Snow with wights rather than face him in single combat.

The Night King has never seen Arya Stark. She is no one to him. During her time with the Faceless Men Arya trained to become "no one."

No one can kill the Night King other than Azor Ahai, and if Azhor Ahai reborn does not kill him, no one will. No one did. 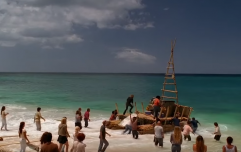 END_OF_DOCUMENT_TOKEN_TO_BE_REPLACED

The key passage: "This is why Jaquen gave Arya that coin, not to turn her into some faceless assassin to kill Cersei, it's why they trained her, it's her entire purpose. Stop he who has cheated death with magic. Who has stolen from the God of Death over and over, whose very existence is an affront to death, because he is undying, and he robs the many faced god. put right that which the others have wronged."

House of Rugby Ireland · Murray & Sexton debate, France's Covid hell and James Tracy interview
popular
The JOE Friday Pub Quiz: Week 232
The most popular baby names in Ireland in 2020 have been revealed
Scarlett Moffatt discovers ‘30% rain’ on weather app doesn’t mean chance of rain
Body of third man found following murder of two men in Cork
QUIZ: Can you correctly identify these European country flags?
All Direct Provision centres to close by 2024 and system to be replaced
Irish cinema named one of the 50 most beautiful cinemas in the world
You may also like
2 months ago
Game of Thrones star Sophie Turner takes swipe at anti-mask Covid sceptics
9 months ago
QUIZ: How well do you remember the final season of Game of Thrones?
11 months ago
Legendary actor Max von Sydow has died, aged 90
1 year ago
WATCH: Peter Dinklage pays tribute to Northern Ireland in SAG acceptance speech
1 year ago
Game of Thrones prequel, House of The Dragon, looks set to arrive in 2022
1 year ago
The final trailer for The Witcher promises many battles
Next Page