If you felt a bit let down by last night's I'm A Celeb, then tonight's will probably cheer you up

Not the best episode...

Tuesday night's episode of I'm A Celebrity Get Me Out Of Here left many viewers feeling a bit short changed.

The bush tucker trial Iain Lee completed wasn't exactly the most difficult one the show has ever produced, quite the opposite in fact, the Space Your Fears trial was all a little bit... well, shit.

In fact, hosts Ant and Dec got into a spot of bother with their producers as they relentlessly mocked the trial on TV on Tuesday.

When the show returned from a commercial break, the duo apologised for the remarks they made about trial and the horribly named Bush Blaster.

Ant said to viewers: "Now, we've been a bit rude about the trial tonight and the producers had a little word with us during the ad break, so we won't be doing anymore of that."

To which Dec added: "Absolutely, we won't be doing it anymore."

Before promptly mocking it once again by saying: "So here it is, the best trial of I'm A Celebrity, already guaranteed a BAFTA, if not an Oscar!" 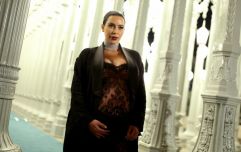 END_OF_DOCUMENT_TOKEN_TO_BE_REPLACED

On Wednesday night, the trial promises to be of a lot better quality with Rebekah Vardy and Stanley Johnson taking on the Fear Factory.

The trial was broken down on I'm A Celebrity: Extra Camp and showed just how difficult it's going to be for the pair to win meals for the camp.

The task will see Stanley strapped down on a spinning wheel filled with critters, while Rebekah will be laying down in a box which tumbles around and is full of insects, rodents and different sized balls. Her job will be to pass the balls to Stanley, who must throw them from his spinning wheel in the dark, down a chute to Ant and Dec.

To paraphrase one of the workers getting the trial ready, Rebekah is going to get very annoyed at Stanley if he's not able to complete his part of the task.


popular
Here's Week 27 of JOE's 19 in 90 quickfire quiz
Someone in Ireland is €311,413 richer after Wednesday's Lotto draw
QUIZ: Can you name all of these characters from Love/Hate?
Google announces Stadia Pro is now available free for two months
Gardaí set up checkpoints on major roads across the country to stop Easter travel
Tesco make changes to their delivery system to favour elderly and in need customers
Trump says WHO "called it wrong" on coronavirus
You may also like
4 months ago
QUIZ: Can you name all 18 previous I'm a Celeb winners in under two minutes?
4 months ago
Predicting the winner of I'm A Celeb 2019 based solely on the promo photos
1 year ago
Harry Redknapp is going on tour following his I'm A Celeb victory
1 year ago
QUIZ: How closely have you been paying attention to I'm A Celeb 2018?
1 year ago
I'm A Celeb's Dec responds to claims the show is fixed
1 year ago
PERSONALITY TEST: Which I'm A Celeb contestant are you?
Next Page