Anyone who has played this game will testify to how terrifying it is.

Writer and director Chris Columbus will bring Five Nights At Freddy's to the big screen, with the help of the game's creator Scott Cawthon and horror producer extraordinaire Jason Blum.

Columbus has several hits under his belt to date - Home Alone, Mrs. Doubtfire, the first two Harry Potter movies - but has also had one or two duds on his recent CV, like the Adam Sandler misfire Pixels, and the big screen adaptation of hit musical Rent. 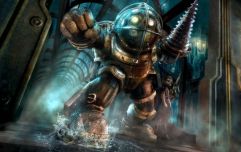 END_OF_DOCUMENT_TOKEN_TO_BE_REPLACED

Horror isn't something people normally associate with Columbus, but he has flirted with the genre before, having written the screenplay for Gremlins back in the day.

Five Nights At Freddy's could be an easy hit for the director, as it tells the story of a night-time security guard who works at a restaurant - that'll be the titular Freddy's Pizza - that is filled with animatronic characters. However, at night-time, when he's there all alone, they have a tendency to come to life and get very murderous.

So, kind of like an evil, scary version of Night At The Museum.

The mix of comedy and horror should work very well for Columbus, and producer Blum has been behind some of the most successful horror movies of recent times, including Get Out, Paranormal Activity, The Purge, Split, Insidious and loads more besides.

There is no word yet on any stars or a release date, but here is a group of people completely freaking out while playing the game, which is never not funny to watch.

popular
Harvard study reveals how many times men should ejaculate each month to stay healthy
Colin Farrell shouldn't win the Oscar this year
Parents left in shock after gorillas start mating in front of kids at zoo
Annie Wersching, best known for role in TV series 24, dies aged 45
The JOE Friday Pub Quiz: Week 331
Forspoken breaks the golden rule of gaming... and not in a good way
S Club 7's Hannah Spearritt and children left homeless after being forced from home before Christmas
You may also like
2 weeks ago
QUIZ: How well do you know the Grand Theft Auto games?
1 month ago
QUIZ: How well do you know the biggest games of 2022?
2 months ago
WATCH: New game I Am Jesus Christ is here and... eh... yeah...
3 months ago
One of the best video games ever made was released 15 years ago today as a free extra
4 months ago
How Twitter is changing gaming as we know it
6 months ago
QUIZ: Can you name the video game from the cover art?
Next Page