Exactly 5 years ago today, the very last episode of the superb Friday Night Lights aired in the US as the East Dillon Lions went in search of the State title. With news that there's going to be a mini-reunion of the FNL cast, now seems like the perfect opportunity for another look back at what made the characters so great.

We've already ranked our favourite episodes but what about the people from Dillon that we all know and love so much?

Here's our favourite 15 characters and a few words on why they'll always be 'Texas Forever'.

END_OF_DOCUMENT_TOKEN_TO_BE_REPLACED

Texas Forever: He embodied the underdog spirit of the Dillon Lions better than anyone else. Tinker was happy to be an unsung hero but his decency and team spirit helped unite the locker room - something that was incredibly important when welcoming the new players from West Dillon and helping them to feel part of the team.

The scene where he helps Luke paint his fence was indicative of this and we also loved his strange friendship that he had with Luke's pig. A good guy and an even better dancer. 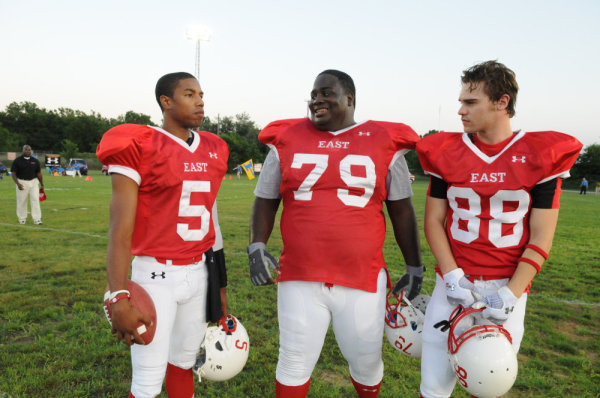 END_OF_DOCUMENT_TOKEN_TO_BE_REPLACED

Texas Forever: Like JD McCoy, Luke was something of a prodigy that quickly rose through the Panther academy before finding out that he lived in Lions territory.

Yes, at the start of his time in the red jersey he was stroppy, confrontational with Vince and hid a severe hip injury from Coach Taylor, but he also put his body on the line more times than anyone else and Luke always gave his very best on the field. Away from it, he was completely infatuated with Becky Sproles, going against the wishes of his evangelical parents. Good for him.

END_OF_DOCUMENT_TOKEN_TO_BE_REPLACED

Texas Forever: There are certain characters that define the spirit of the show and Matt's grandma is most definitely one - although in some ways, she's really #7's mom.

You wouldn't blame Matt if he went off the rails more often during the five seasons. His mom walked out on him, his dad prefers to be in Iraq and Julie, despite her excellent qualities, was a bit of a drag at times. Despite her struggles with dementia, Lorraine really was the only stable person in his life thus ensuring that Matt kept his eyes clear and heart full.

Everybody leaves Matt at some point, she didn't.

Texas Forever: Some of the rally girls might be dumber than a box of hair but thank god for Jess because she's the exact opposite. Not only is she tough, capable and clever - she effectively raises her brothers while her father is busy with the business in Dallas- but she also knows more about football than 99% of Texas.

Vince could have dated some wallflower from his school that agreed to his every demand but Jess not only improved his game, she also made him a better person.

Texas Forever: How do you pull yourself together after suffering a life-altering injury like he did?

Friday Night Lights was never just about football and no character sums this up better than the original QB1. His arc was one of the strongest ones in FNL because over the course of three seasons we witnessed all of the following; a career ending injury, his tumultuous relationship with Lyla, those wheelchair rugby hopes going up in smoke, a conflicted friendship with Riggins, his natural talent for coaching and the clearest proof that a father will ultimately do anything for his child.

His life may have changed considerably but one thing always remained the same, the levels of respect and love that he commanded from the people of Dillon. His send off with Tim in New York was just perfect.

Texas Forever: Yes, he's a screw-up but that's why we love him. Billy isn't flawless but it's those efforts to improve himself that makes him a favourite of ours. Like everyone else in the show, his heart was always in the right place. When their dad left, it was up to the older Riggins brother to step up and be the man of the house and while he didn't always succeed at least he tried. The moments when Billy and Tim are together on screen are absolute gold because they're just like actual brothers...but with more beer.

By the end of the show, Billy becomes more of a calming and fatherly influence after starting his own family with Mindy and he also begins to take a personal interest in Luke and Becky.

Still though, who remembers his stint as coach of the Dillon Lions' special teams or this moment with Tim?

Texas Forever: He could be infuriating, obnoxious and adulterous but Buddy was always a man that lived Panther football...until things turned sour. Some of his business investments weren't very sound, Lyla probably still doesn't forgive him for costing her that place in Vanderbilt, but you can't keep a good man down.

The East Dillon Lions gave Buddy a new sense of purpose, renewed energy and love for football. In return, he boosted the team in ways that were almost impossible to measure. Another thing that's worth mentioning is the job that he gave Riggins at the car dealership because it was an important factor in getting Tim early parole.

Texas Forever: When we first meet the pride of the Lions, he was being held in the back of a police car with only two options, football or jail. A tough domestic life threatened to see Vince's incredible athletic ability slip through the cracks but it's testament to his attitude under Coach Taylor that he turned his life around and led the Lions to State.

Who can't identify with the story of a good kid that just gets pulled in the wrong direction by some dodgy characters?

Despite a few weeks when he became too big for his boots, Vince was a leader of men that overcame his own personal problems to lead his team to glory.

Texas Forever: Some would argue that he should be number one just for being the lead singer in Crucifictorious alone but he has to settle for seventh here. During the 5 seasons of FNL, Landry was always something of an outsider looking in because he never conformed with the jock culture of Dillon but still craved its hero worship - if only to help his chances with Tyra.

While other characters had their moments of doubt and selfishness, Landry always seemed willing to put other peoples needs before his own.

He was already a gifted scholar but through sheer guts and determination, he somehow ended up with a spot on the football team and the girl of his dreams. Kudos.

Texas Forever: When the entire hopes of Dillon seemed like going up in flames, the soft-spoken QB stepped in to save his team - a feat that he repeated time and time again. His actions were all the more remarkable given the turmoil in his private life and the increasing pressure that was being placed on the young teenagers shoulders.

Matt was also an incredibly kind person, taking care of his grandmother and always doing the best for Julie. He's the very definition of leading by doing rather than saying and he didn't even make too much of a fuss when J.D McCoy took his starting place.

Still though, would you rather be him or Riggins?

Texas Forever: An absolutely phenomenal athlete, the running back was arguably the best player to ever feature in the show. Smash was always a little bit cocky and brash but there was a serious side to him also. Take a look at how he deals with the racist remarks that were made by MacMcGill or his dedication to achieving his college dreams and not letting a potentially career ending injury get the best of him.

This whole sequence is arguably the best thing in the entire five seasons of Friday Night Lights. Who's cutting onions?

Texas Forever: Dillon is a goldfish bowl of a town where reputations can absolutely destroy people and dreams have a tendency of dying on their arse. When we first met Tyra she seems like just another lost cause. Hopelessly devoted to a dead-end relationship, struggling in school and with no future prospects apart from settling down with her jock boyfriend.

Three people helped turn things around for her. 1) Landry, whose patience, effort and friendship helped her become a better person, 2) Tami Taylor who was arguably the most influential person in Tyra's life because she made her believe in herself and in a future outside of Dillon but most importantly, 3) Tyra herself.

Rather than just sit back and let other people tell her that she was stupid and going nowhere, she worked harder than anyone else in the show and reaped the rewards.

Texas Forever: They say that behind every great man is a great woman and this is incredibly true with Tami. The Taylor's are probably the best couple on TV because they understand the most important thing in any relationship, compromise.

Tami is principled, caring and incredibly genuine because she always puts other people before herself. This being said, she's also tough and opinionated - something that's absolutely crucial in such a male-centric show.

The biggest compliment that we can pay Tami is that anyone who meets her invariably comes out the other side as a happier and better person. She's absolute magic.

Texas Forever: If you're ever facing a problem in life then just ask yourself this simple question, what would Riggins do? I bet the answer is clear!

Let's be honest, women want him and men want to be him because Tim is an absolute rogue that does whatever he wants and doesn't care about the consequences.

He sleeps with an endless list of women, shows up to training hungover, leaves college after a week, drinks an incredible amount of beer, happily smashes opponents in two, fights with his brother, gives everything for his teammates, fixes cars, barely talks and still does the most incredibly kind gesture that anyone could ever do for their family.

The best thing about Riggins is that he really doesn't care what people think about him. What's not to love?

So ladies, do you know anyone that really fancies him?

popular
One of the best movies of the decade has just been added to Netflix
20 years ago, one of the best sci-fi movies of the 21st century was a box-office bomb
Surprise frontrunner emerges as potential next James Bond as producers 'love him'
One of the scariest films of all time is among the movies on TV tonight
Katherine Ryan says famous TV star is a ‘predator’ and everyone in industry knows
Katherine Ryan shares harrowing truth about media coverage of ‘famous TV predator’
Very popular US fast food chain planning to open in Ireland
You may also like
4 days ago
All of the big new Netflix movies and shows arriving in December
5 days ago
You can watch Netflix's new heist series NINE MILLION different ways
5 days ago
The White Lotus Season 2 characters we'd least want to spend a week in Sicily with
6 days ago
Where to stream the "most-watched TV show of 2022" in Ireland
2 weeks ago
Prime Video has just quietly added 16 interesting movies to its library
2 weeks ago
REVIEW: Samsung's S95B QD OLED TV is quite the sight to behold
Next Page