The actor gave one of the most powerful performances in cinema history in Stanley Kubrick's war classic.

R Lee Ermey, whose powerhouse performance as a drill sergeant in Stanley Kubrick's Full Metal Jacket is generally regarded as one of the best in cinema history, has died at the age of 74.

Ermey passed away from complications arising from pneumonia. 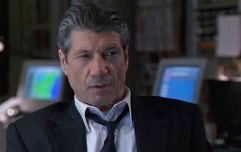 END_OF_DOCUMENT_TOKEN_TO_BE_REPLACED

The former marine and veteran of the Vietnam War achieved fame somewhat by accident; he was initially employed as a technical consultant, given his military experience, by Kubrick but wanted the role of Gunnery Sgt Hartman so badly that he sent the director an audition tape of him shouting insults while being pelted by tennis balls.

“In the course of hiring the marine recruits, we interviewed hundreds of guys. We lined them all up and did an improvisation of the first meeting with the drill instructor. They didn’t know what he was going to say, and we could see how they reacted. Lee came up with, I don’t know, 150 pages of insults,” Kubrick said.

Ermey had more than 60 roles in his lifetime, and featured in films as diverse as Apocalypse Now, Se7en and Dead Man Walking.

popular
Netflix has just added 33 very big movies to its library
The full list of cancelled flights in and out of Dublin Airport on Monday (so far)
QUIZ: Can you guess the crisps from the pixelated packet?
Six people dead after mass shooting at Fourth of July parade in Illinois
One of the coolest movies of recent years is now available to watch at home
QUIZ: It's time for one of our trickiest General Knowledge Quizzes yet
An underappreciated sci-fi blockbuster is among the movies on TV tonight
You may also like
2 years ago
Actor and comedian Brendan Grace has died, aged 68
3 years ago
Georgie Burgess creator Roddy Doyle has written his own tribute to Pat Laffan
4 years ago
Anti-apartheid campaigner Winnie Mandela has died aged 81
4 years ago
Influential physicist and author Stephen Hawking has died aged 76
4 years ago
One of cinema's great modern composers found dead, aged 48
4 years ago
Samuel L. Jackson, Chris Rock and more post tributes to the passing of Reg E Cathey
Next Page