Arya Stark and Queen Cersei may have accidentally revealed some HUGE spoilers.

We're writing this and even we don't want to keep reading.

Fine, then this is on you.

Maisie Williams has posted an Instagram post to celebrate not only her final day filming Game Of Thrones in Belfast, but also her final day in the role of stab-happy Arya Stark.

goodbye belfast. goodbye arya. goodbye game of thrones. what a joy i’ve had. here’s to the adventures to come #lastwomanstanding #barely #immasleepforthenextfouryears #justkiddingidontsleep

END_OF_DOCUMENT_TOKEN_TO_BE_REPLACED

The image itself isn't much of a spoiler, because we kind of already knew that the final season was going to be a bloody mess (literally), but it is her hashtags used underneath that piqued our interest.

Uh oh. Does that mean we should prepare to say goodbye to her sister Sansa Stark? And even - please, no! - The Queen Of Dragons??

Maybe it doesn't mean anything in direct correlation to the show? Maybe it simply means that Williams was literally the last female filming, and it is just the males with scenes left to finish?

Possibly, but then we spotted a comment on the photo by none other than Queen Cersei herself... 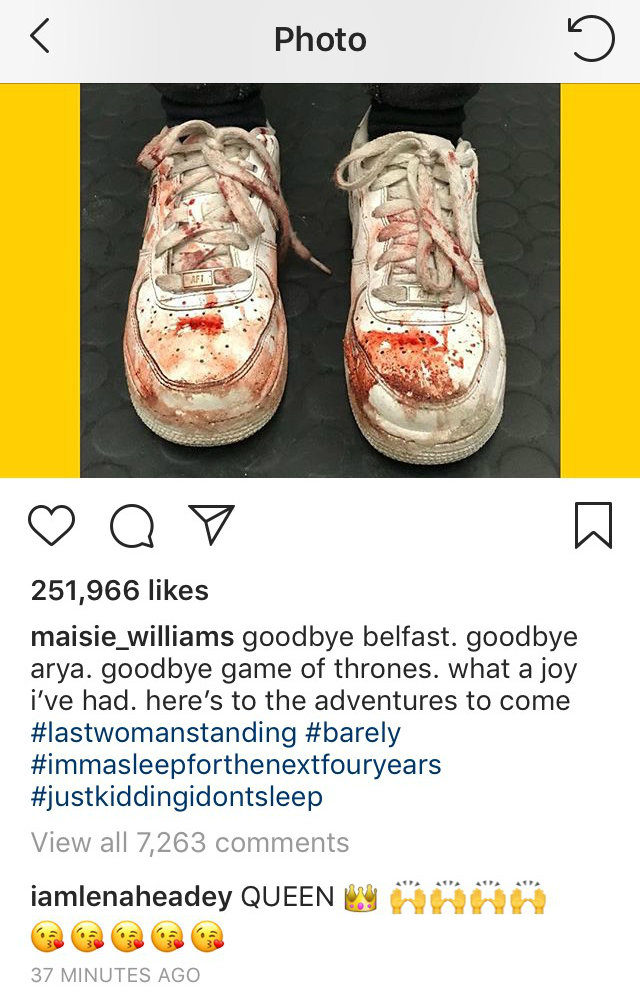 Now, again, maybe actress Lena Headey is just calling Maisie herself a Queen, which is totally understandable because she is a total bad-ass in the show.

However... and go with us here... maybe Headey is actually calling Arya a Queen, because she is the last woman standing, and now she is sitting atop of the Game Of Thrones at the show's end?

See? We did try to tell you that these could be potentially HUGE spoilers.

Or to paraphrase a famous GOT quote, we know nothing, and we are reading WAY too much into this.

We'll know for sure when the eighth and final season is released "sometime in 2019".