One controversial Irish star will be on the red sofa this week...

The night was dark, for all the stars were out.

Out in London filming the Graham Norton Show, we mean.

As per usual, stars from across the entertainment world will be joining the Corkman for a night of pre-Halloween fun.

First and foremost, Irish rockstar and budding author Bono will be appearing on the show, discussing his new book SURRENDER: 40 Songs, One Story. Don't forget, it's not a memoir, it's a WE-moir. 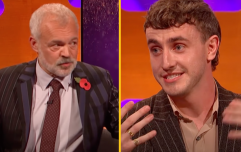 END_OF_DOCUMENT_TOKEN_TO_BE_REPLACED

The U2 frontman isn't the only music royalty to make it onto the red couch tonight, as Taylor Swift will be on the programme, fresh from the studio releasing her latest album Midnights.

Hollywood star Eddie Redmayne is set to appear, and hopefully will bring the same charm and panache as he did when he spoke to JOE back in the day.

Alex Scott, host of Football Focus and former England player will also be promoting a memoir, How (Not) To Be Strong, a look back on her career as a footballer and a media personality.

And finally, expect some smooth vocals from Lady Blackbird in a musical performance that is sure to delight.

The Graham Norton Show is on BBC One Northern Ireland on Friday (28 October) at 10.40pm.