Many felt this was beyond the pale.

Graham Norton is one of the most popular and accomplished television presenters on our screens today, and his BBC One chat show is by far the most revered and star-studded. For many people it is must-see telly - either on Friday nights or later via iPlayer catchup.

But Friday's episode has been criticised in the strongest terms possible by people who are unhappy with one of the invited guests in particular. The famous sofa was filled with big name thespians from Kenneth Branagh's widely-anticipated Murder on the Orient Express, and Judi Dench in particular shone. 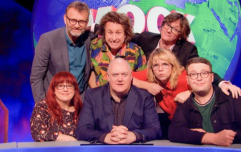 END_OF_DOCUMENT_TOKEN_TO_BE_REPLACED

But in the current climate of more and more victims of abuse coming out against their famed and celebrated abusers, the appearance of Johnny Depp on the show caused significant distress to viewers who felt there were double standards at best, zero consequences at worst, for those accused of abuse.

In 2016, the actor's ex-wife, actress and model Amber Heard, was granted a restraining order against Depp, as court documents at the time revealed Heard's claim: "During the entirety of our relationship, Johnny has been verbally and physically abusive to me."

Depp denies the claims, but many found his appearance on the Graham Norton Show galling, especially as the host had called out Kevin Spacey in his intro. Many found the programme difficult to watch, or boycotted it altogether.

Why is Jonny Depp on The Graham Norton Show? Hahah remember that time he was abusive to his wife and she filmed it. #TheGrahamNortonShow

popular
18 counties hit with weather warning as temperatures set to reach 29 degrees
Netflix has just added an incredibly tense 97-minute thriller
Pogues bassist Darryl Hunt has died, aged 72
Nearly 100 flights delayed at Dublin Airport on Monday
QUIZ: Can you get top marks in this short but tricky Irish geography quiz?
Public urged to conserve water as around 60 areas at risk of supply shortages
QUIZ: Can you name all the counties in Ireland without the letter 'E'?
You may also like
1 week ago
QUIZ: Can you recognise the TV theme tune from just one line?
2 weeks ago
The JOE Friday Pub Quiz: Week 304
3 weeks ago
Comedian Rhod Gilbert reveals he is undergoing cancer treatment
1 month ago
Tonight's episode of Love Island features the "most dramatic recoupling ever"
1 month ago
The Chase star Bradley Walsh can't control his laughter after the most NSFW answer ever
2 months ago
The six Eurovision countries with "irregular voting patterns" have been revealed
Next Page