You've seen this one before.

Say what you want about Rob Zombie's attempt to revive the Halloween franchise; at least the guy showed some personality.

A brilliant, under-seen Graham Taylor documentary is on TV tonight

END_OF_DOCUMENT_TOKEN_TO_BE_REPLACED

Zombie's two bites at the blood-soaked cherry surprised nobody who had seen the likes of House of 1000 Corpses and the admittedly somewhat underrated The Devil's Rejects.

Here was a remake/reboot that sneered at any trace of subtlety, peppering the childhood of Michael Myers with comically rotten people and scenarios that could only lead to murderous rampage.

In depicting Myers' troubled coming of age, Zombie did what so many unnecessary add-ons and weak scripts do; rob an iconic character of all mystery.

That's the problem with such nightmares. We want more.

Imagine a world in which Freddy Krueger, Jason Voorhees, Pinhead, Leatherface and, oh yes, Michael Myers only got one movie in which they were barely glimpsed. Maybe they'd still haunt your dreams.

Alas, you know how it turned out.

END_OF_DOCUMENT_TOKEN_TO_BE_REPLACED

And so, one approaches the latest Halloween smackdown with a knowing slice of weariness.

The newest adventure for Michael Myers asks you to forget the nine other Halloween-branded films that followed the 1978 original, representing a direct follow-up to the events of that terrifying night.

Perhaps of actual importance; Laurie and Michael aren't actually brother and sister. That was just a myth, conjured up by gossip-mongers and excitable screenwriters.

END_OF_DOCUMENT_TOKEN_TO_BE_REPLACED

Halloween 2018 - we're calling it that as there are now three films in this particular factory that are simply named 'Halloween' - has talked a big game in advance.

You had OG horror master John Carpenter gushing about the script - courtesy of director David Gordon Green alongside Danny McBride and Jeff Fradley - enthusiastically noting that he was blown away, audiences would be terrified anew, yada yada yada.

For their part, Gordon Green and co. were at pains to underline that Halloween 2018 would be no mere fresh lick of red paint, no phoned-in remake, but a brand new exciting and chilling chapter.

To that end, the new Halloween can boast approximately two vaguely new ideas.

One is compelling enough and works to some extent, while the other is borderline ridiculous and is taken off the table as fast as it arrives.

Let's talk about the first one. 40 years on, Laurie Strode has gone from teenage prey to grandmother hunter in the vein of Sarah Connor.

The move makes sense, even as her loved ones - distant and almost lost - dismiss valid fears as wild ramblings. But just because you're paranoid, and all that...

Laurie's commitment to survival has resulted in an 'Arnold Schwarzenegger in Commando' scenario, only instead of an idyllic hideaway with family, it's really more of the third act 'weapons montage' bit as she prepares, constantly, to take down the evil that she knows will one day return.

Curtis, believable and brilliant from the first moment she steps into frame, sells it.

The actor recently joked how her obituary will read 'Halloween actress dead' and how she's totally comfortable with that, proud even. It shows in her return - as it did in the enjoyable Halloween H20, even if she has confessed that she treated that one as something of a cash-grab.

Simply put, she's too good for these movies, barring the first one, which remains a masterpiece that did so much more with less and still manages to crawl under your skin all these years later.

A big reason why is John Carpenter's utterly perfect score. He's back on music duties here alongside his son Cody and composer Daniel Davies, and the work is strong even if a touch buried in the final mix.

Tracks like 'The Shape Returns' and 'Halloween Triumphant' are worthy, if not all that necessary, updates, while effective motifs creep in nicely throughout. 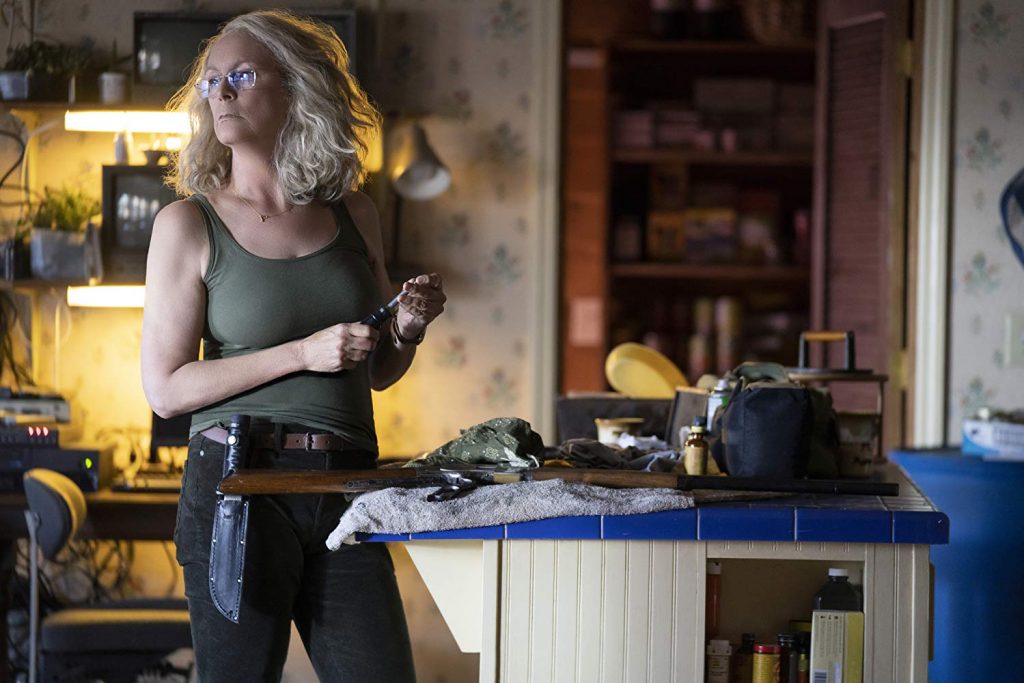 So kudos to the old school for their classy efforts, even if we're dealing with a very tired corpse indeed.

Four decades on from the night he stalked and slashed through a peaceful American suburb, Michael Myers returns, for we are not done with him yet.

The set-up is rickety enough.

A pair of cartoonish British podcasters (think Serial) visit Michael in captivity before he's due to be transferred for the last time ever (on Halloween night, would you believe) and rile him up by presenting his famous mask to him. He says nothing. Actions speak louder.

When the inevitable escape occurs and he's back in the game, Halloween 2018 reverts to tired type as Myers picks off doomed cannon fodder in increasingly gory and shockingly dull ways.

One of his first victims is especially young, because the film is desperate for you to know how severe this is.

Later, a bizarrely lifeless one-take sequence finds Myers brutally murdering two women in the space of about 45 seconds, along with the tease that he might turn his attention to a crying baby (edgy stuff!) while you, the viewer, feel nothing at all.

That's the problem with entrusting this to a workmanlike director such as David Gordon Green. The end product has almost no atmosphere to speak of, everything feels flat and it is never once even close to scary.

That last bit is a big problem for a horror movie, you'd think. It's not just that you've seen all this before - make no mistake, Halloween 2018 is just another Halloween movie - you've seen it done a great deal better.

By the time the entertaining yet weirdly anti-climactic final battle plays out, you may well kick yourself for getting tricked yet again.

As Sheriff Bracket remarked back in 1978; everyone is entitled to one good scare.

Trouble is, Michael Myers had his long ago.