Episode two of Hector USA will see him meet people who took part in the Selma bridge crossing in 1965.

Last week on Hector USA, Navan's most famous intrepid traveller began his American roadtrip with a stop-off in Georgia. This time though, he's going home. 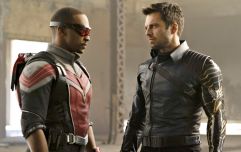 The Ultimate Marvel Quiz: Falcon and the Winter Soldier

END_OF_DOCUMENT_TOKEN_TO_BE_REPLACED

Sweet home Alabama, that is.

After some bass fishing in Lake Smith, he meets up with the Blind Boys of Alabama for a singsong before heading to Selma to walk on Edmund Pettus Bridge. Once there, he meets some of the people who were there on Bloody Sunday in 1965 and experienced first hand the horrors that took place.

He'll also be togging out for the Auburn College Football Team before getting some pageant training with the most desired pageant coach in the nation, Bill Alverson. He's on the road again then heading further south where he's part of the blessing of the boats 'Irish Style' with the Bishop.

This week's episode airs tonight (Thursday, 31 October) on TG4 at 9:30pm, or you can also catch up on the TG4 Player from anywhere in the world.

It's still only early days on Hector's USA adventure, and the next stop on the list is the "The Magnolia State" of Mississippi.

popular
Paul Murphy says there will be 2014-style mass protests if the Government re-introduce water charges
Man arrested after walking into Garda Station, spraying petrol on Gardaí and attempting to light it
Seth Rogen shocks fans after shaving beard off
Ireland seeing worst hospital overcrowding since the Covid-19 pandemic began, says INMO
Here are the best movies on TV this evening
The 50 most iconic songs of all time* have been revealed
Minister for Housing invested €30,000 into real estate investment fund
You may also like
3 days ago
Here's how you can play for the $396 million U.S Mega Millions jackpot from Ireland
5 days ago
WATCH: Michael Fry has discovered the perfect way to be an absolute dote to his Godmother Catherine
5 days ago
COMPETITION: Win a star-gazing camping adventure to the stunning Aran Islands for you and your housemate
1 week ago
If you’re throwing out your old phone, TV or laptop, this is the correct way to do it
1 week ago
[CLOSED] COMPETITION: Win an epic adventure in this stunning Mayo lodge for you and your housemate
1 week ago
Irish healthcare company unveils brand new itchy scalp solution
Next Page