It's Wednesday. It's freezing. It's dark.

And for the second day in a row, there are no Christmas movies on the list...

END_OF_DOCUMENT_TOKEN_TO_BE_REPLACED

Here's what we're dealing with anyway:

The final film from the fantastic sci-fi adventure series, though you really shouldn't watch unless you've seen the rest of them, or at least one of them.

The film that launched one of the greatest sporting sagas of all time, that is still being enjoyed over 40 years later. 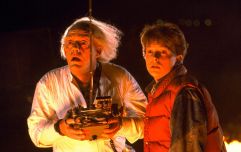 END_OF_DOCUMENT_TOKEN_TO_BE_REPLACED

A Million Ways to Die in the West - Comedy Central - 9pm

Quite a funny (if not a bit forgettable) movie starring Seth McFarlane, Charlize Theron and Liam Neeson. It's a bit mad, but has a decent laugh or two.

The fourth instalment in the series of films adapted from the Jason Bourne novels, this time starring Jeremy Renner, Rachel Weisz and Edward Norton. Might be up your alley if you're looking for an action-packed Wednesday night.

A very particular set of skills, but for a third time.

A quirky comedy starring two very talented actresses in Lola Kirke and Greta Gerwig. Quite a good movie, if you can brave the late start time...

Advertisement
House of Rugby Ireland · Quinn Roux on finding a home in Ireland and Mike McCarthy brings the absolute HEAT!
popular
Cabinet to decide on €91m vaccination deal
Man arrested and charged for breaching Covid regulations in Kildare
Status Yellow rainfall warning issued for 11 counties
QUIZ: Name all the countries of the EU that contain 2 vowels or less
QUIZ: Can you name all the teams in the NBA from their locations?
Joe Biden inauguration rehearsal paused as Capitol building goes into lockdown
INTO calls on government to reconsider plans to partially open schools
You may also like
2 days ago
QUIZ: Can you name the Marvel Cinematic Universe film from just a single screen shot?
3 days ago
Netflix announces new true crime documentary about terrifying LA hotel
3 days ago
Liam Neeson says he is retiring from action films
3 days ago
Irish crime thriller Broken Law has just been added to Netflix
4 days ago
Macaulay Culkin calls for Donald Trump cameo to be removed from Home Alone 2
4 days ago
A documentary about Pelé is coming to Netflix next month
Next Page