Staying in this Friday?

The Late Late Show will be welcoming 100 audience members this Friday night, making it the largest studio audience for the show since before Covid restrictions were introduced in March 2020.

It's ticking towards the Bank Holiday weekend and while you will almost certainly have plenty of plans in place, perhaps you're looking to tread softy into the weekend with a night in on Friday. 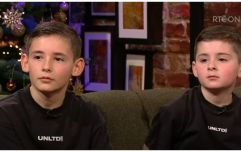 END_OF_DOCUMENT_TOKEN_TO_BE_REPLACED

If that is the case, then you'll be interested to hear what this week's Late Late Show has in store for you.

Ireland's Fittest Family is back! Well, it soon will be anyway.

Coaches Anna Geary, Davy Fitzgerald, Derval O’Rourke and Donncha O’Callaghan will be on the Late Late couches to chat about the show's return on 31 October.

If you haven't seen Ireland's Fittest Family before, it's probably Ireland's closest thing to Squid Game.

Robert Sheehan will be showing off the midland's accent he says he'll never lose as the Love/Hate and Umbrella Academy star chats about becoming an author and other things.

One of the stars of the All-Ireland winning Meath ladies football team Vikki Wall will share her favourite photos from the GAA year from the 2021 edition of the book Season of Sundays.

Author John Boyne will tell the stories behind some of his most successful books and what inspires him to keep writing best-selling novels.

Billy Connolly will join the show via video feed from Florida to reflect on 50 years of comedy.

And there's some fantastic music on show as the supremely talented Tolu Makay and Malaki will perform their brand new single 'The Light'.