WATCH: One of the best 90s children's television shows is getting its own movie

The boy with the football head is back.

END_OF_DOCUMENT_TOKEN_TO_BE_REPLACED

How many times did we whistle that theme tune as children? If you're a 90s kid, you do not need an introduction to Hey Arnold! If you haven't watched it, we don't know whether to be ashamed that you haven't or excited that you will get to watch it as a new viewer.

It was a cartoon on Nickelodeon that followed the many adventures of Arnold, a boy with a football-shaped head and a cheeky smile.

He effortlessly strolled his way around New York City with his friends who were also as odd as he was.

The show taught us about life in many ways and it even showed us from an early age just how strange the female species is.

Helga was the meanie of the show and constantly bullied Arnold but secretly she was actually madly in love with him and even had numerous shrines in his honour.

The television company have released a sneak peek trailer for the new movie and it premiered at San Diego Comic-Con. 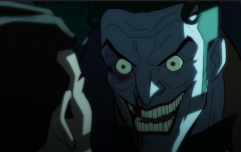 WATCH: Batman: The Long Halloween trailer takes a look at one of his most famous cases

END_OF_DOCUMENT_TOKEN_TO_BE_REPLACED

The trailer brings us down memory lane and it familiarises viewers with all the different characters from the incredible show.

The Jungle Movie will be a two-hour television movie and will hopefully wrap up some loose ends from the television show.

At the end of the last series of Hey Arnold!, he found a secret map to a jungle where he believed his parents had gone missing and this movie will see Arnold and his friends exploring that jungle.