Hugh Jackman has played Wolverine for the past 17 years, he's not going to hand over his superhero status to anyone.

The actor, who announced earlier this year his upcoming appearance in 'Wolverine 3' will be his last, has been eyeing up names to replace him and believes the British star will be the best person to take over the adamantium claws.

Asked who he thinks should get the job, Jackman said: "I've been asked that question a lot, and I'm always like, 'I don't wanna make it too easy on the studio to replace me,' you know?" 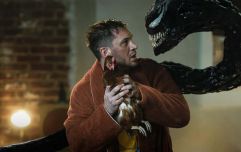 Venom: Let There Be Carnage is the most homoerotic blockbuster since Top Gun

END_OF_DOCUMENT_TOKEN_TO_BE_REPLACED

He added to MTV News: "He's younger than me for sure. I think Tom Hardy would be a great Wolverine."

Jackman will star in the upcoming sequel, but the signs point to him not reprising his iconic role in the 2016 'X-Men: Apocalypse'.

The Big Reviewski || JOE · The Big Reviewski with Dune, a mini-Hangover reunion & the best of Timothée Chalamet
popular
One of the best thrillers of the decade is among the movies on TV tonight
A villainous Tom Cruise performance is among the movies on TV tonight
The JOE Movie Quiz: Week 125
"Like a whip" – director describes fatal shooting on Alec Baldwin film set
QUIZ: Get the ball rolling with this General Knowledge Quiz
The full list of all the new shows and movies coming to Netflix in November
A brilliant, under-seen Graham Taylor documentary is on TV tonight
You may also like
3 weeks ago
The first Venom: Let There Be Carnage reviews are... not great
1 month ago
You can now buy the cars from Mad Max: Fury Road, if you're in the mood
5 months ago
WATCH: We get our first look at Tom Hardy's new adversary in Venom: Let There Be Carnage
8 months ago
Tom Hardy to star in Netflix's new action thriller from the director of The Raid
2 years ago
Venom 2 has found a new villain for Carnage to play with
2 years ago
There was a strong reaction to that massive character return in Peaky Blinders
Next Page