The identity behind that secret baddie in Hobbs & Shaw

And we look at the reason behind Fast & Furious 8's missing post-credits scene.

The Fast and the Furious franchise has loved teasing up potential sequels with Marvel-esque post-credits sequences.

END_OF_DOCUMENT_TOKEN_TO_BE_REPLACED

Fast & Furious 6 showed us that Han (Sung Kang) was killed in Tokyo by none other than Deckard Shaw (Jason Statham).

Furious 7 didn't have one as the movie bowed out with a memorial to Paul Walker, but the next sequel was originally intended to have something for those who hung around after the credits began to roll.

But for those who did, they were disappointed to discover there was nothing there.

On the fourth and final episode of TBR Spotlight: The Fast & Furious Saga, in which Eoghan, Garry and Rory tackle the seventh, eighth, and first spin-off Fast & Furious movies, they discuss [LISTEN from 54.20 below] why Fast & Furious 8 didn't have a post-credits scene.

It turns out that while filming was taking place on Fast & Furious 8, the producers noted the immediate on-screen chemistry between Hobbs (The Rock) and Shaw, and the first discussions of a potential spin-off began to build.

As reported by The Wrap, producers filmed a post-credits scene that would've essentially teed up the Hobbs & Shaw movie, but Vin Diesel - who was also a producer on the movie, and (arguably) the star of the show - was apparently very unhappy with this addition, and demanded it be removed.

END_OF_DOCUMENT_TOKEN_TO_BE_REPLACED

It didn't stop Fast & Furious: Hobbs & Shaw from being made and released in 2019 (taking the original release date for Fast 9 in the process), and by the end of THAT movie, we were left with another cliffhanger: Who was the voice of The Director, the nefarious, all-seeing evil head of Eteon?

The end credits states that the voice is provided by someone named Champ Nightengale, and a quick Google Search will reveal that this is actually the pseudonym for... Ryan Reynolds.

Reynolds was in Hobbs & Shaw as the slightly obsessed best friend of Hobbs, but don't hold out for him to be a bit of a double-agent, as this voice-over gig was just a favour to director David Leitch (who also directed Reynolds in Deadpool 2).

Turns out that while they were initially going to reveal who the overarching villain was, the cameo arrivals of Reynolds, Kevin Hart, Rob Delaney, Helen Mirren, Roman Reigns, and Eddie Marsan sent them in a different direction.

There was talk at the time that the role was intended for Keanu Reeves (Leitch also co-directed John Wick), and now there are fresh rumours that Reeves is being touted for the role in Hobbs & Shaw 2. 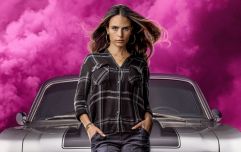 END_OF_DOCUMENT_TOKEN_TO_BE_REPLACED

That sequel likely won't arrive any time before 2023 (we've got Fast 10 and Fast 11 before then), so Dwayne, Jason, Ryan, and Keanu have a lot of time to work out their schedules before then.

Fast & Furious 8 is available to watch on PVOD platforms, while Hobbs & Shaw is available to stream on NOW at the time of writing. Fast 9 will be arriving into Irish cinemas on Friday, 25 June.

Clip via The Fast Saga