An amazing story and an amazing interview.

The Tommy Tiernan Show seems to capture the eyes of the nation every time it airs, and this week it was no different.

While he interviewed Mary Coughlan and Senator Eileen Flynn on last night's episode, it was hurling player Zak Moradi that stole the show on Saturday. 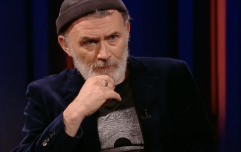 END_OF_DOCUMENT_TOKEN_TO_BE_REPLACED

Moradi grew up in Iraq in a Kurdish family but when he was 11 years old his family fled to Leitrim.

Soccer was his first love when he arrived in Ireland, but he soon learned that he was more than capable with a hurl in his hand, and he hasn't looked back since.

He told Tommy Tiernan about his story, discussing how welcoming the people of Leitrim were when he and his family arrived.

He spoke about how he travelled from Iraq to Oman to Frankfurt, before finally making it to Limerick, where his "life began".

Moradi also spoke about how positively the GAA affected his life, with him even travelling back to Leitrim for hurling training after he and his mother moved to Tallaght.

Dozens of people took to social media to praise the interview, and Moradi's attitude in general.

popular
Nearly 100 flights delayed at Dublin Airport on Monday
QUIZ: Can you get top marks in this short but tricky Irish geography quiz?
Family of Ashling Murphy share heartbreaking tribute at Fleadh Cheoil
Motorcyclist in his 30s dies following two-vehicle collision in Kerry
RTÉ tries to solve Michael Collins murder in new documentary
4-year-old girl killed in Sligo caravan park named as Alice Dunleavy
QUIZ: Can you score 12/15 in this difficult General Knowledge Quiz?
You may also like
5 months ago
Snooker legend Jimmy White praised following Tommy Tiernan interview
6 months ago
Barry McGuigan leaves viewers heartbroken after speaking of daughter's death
7 months ago
There is no such thing as an Irish celebrity
8 months ago
A new Tommy Tiernan special and Adam King's animated show among highlights of RTÉ's Christmas schedule
10 months ago
Jason Byrne forced to cancel tour dates due to a heart condition
1 year ago
The Tommy Tiernan Show was watched by more viewers than The Late Late Show last weekend
Next Page