James Bond has NO TIME TO DIE.

Whether you think the title of the movie is badass or extremely cheesy, you can forgive us for being very excited about the movie's release.

As we all know, Daniel Craig is set to retire the step out of the tuxedo after the release of No Time To Die, so we're certain that he'll want his last outing as Bond, James Bond to end on a high. 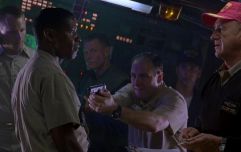 END_OF_DOCUMENT_TOKEN_TO_BE_REPLACED

And even if the movie does slightly disappoint (which we hope it won't), for many people it will have been so long since they have seen a blockbuster in a cinema, that they'll just be happy to be a part of the experience.

But based on the latest trailer for the flick, we've definitely got something to look forward to.

In No Time To Die, Bond has left active service and is enjoying a tranquil life in Jamaica. His peace is short-lived when his old friend Felix Leiter from the CIA turns up asking for help. The mission to rescue a kidnapped scientist turns out to be far more treacherous than expected.

Take a look at the action-packed new trailer here:

The mission that changes everything begins… #NoTimeToDie in cinemas this November. pic.twitter.com/nBP6aUrwDy