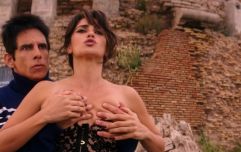 END_OF_DOCUMENT_TOKEN_TO_BE_REPLACED

Rawson Marshall Thurber, the director of Dodgeball is back and he’s convinced the still gorgeous (and still single) 44 year old Jennifer Aniston to play a poop-mouthed stripper in his next film, We’re The Millers.

A great idea we think you’ll all agree.

Already looking funnier than a lot of other guff that’s being released at the moment, We’re The Millers also stars Will Poulter, an excellent young English actor who’s now getting some well-deserved work in the Shtates, albeit involving a painful and very funny encounter with a tarantula. Also on board is Ed Helms, Jason Sudeikis and everyone’s favourite Parks and Rec star, Nick Offerman.

But you don’t really care about any of that do you. You heard ‘Red Band’ and your randy, teenage little ears picked up.

And, although they did steal that TLC-loving joke from The Other Guys, we forgive them because of the whole, you know, Jennifer Aniston stripping thing we mentioned earlier.

The Big Reviewski || JOE · The Big Reviewski with Andy Serkis, Squid Game follow-ups & the return of Succession
popular
Emergency services rush to high-rise building on fire in Tallaght
Two prisoners who absconded from Loughan House in Cavan arrested by Gardaí
The JOE Friday Pub Quiz: Week 265
Ryanair is seeking applicants for "the worst job in Ireland"
Hollywood couple Joe Manganiello and Sofia Vergara seen enjoying a Cork chipper
QUIZ: Can you master this General Knowledge Quiz?
QUIZ: Can you score top marks in this random European trivia quiz?
You may also like
6 years ago
VIDEO: The trailer for Victor Frankenstein is here and it looks amazing
6 years ago
Video: The 8 Mile honest trailer is here and it's hilarious
6 years ago
Video: The Mission Impossible: Rogue Nation trailer with added Chris Farley is superb
6 years ago
Video: Michael Fassbender looks great in the new trailer for the upcoming Steve Jobs biopic
6 years ago
Video: Two Tom Hardys star in the trailer for a new movie based on the Kray twins
6 years ago
Video: Johnny Depp is barely recognisable as Whitey Bulger in the first trailer for Black Mass
Next Page