WATCH: Jimmy Kimmel asks Americans to name any country on a map, and they seriously struggle

So many people seem to think Africa is a country...

Americans often get a hard time for their intelligence...

They have produced some of the greatest minds of all time, as well as some of the most exceptional artists that the world has ever seen.

But it seems like geography isn't exactly their strong point.

Chat show host Jimmy Kimmel had his crew take to the streets of Los Angeles to ask random Americans to point out a country on a map.

And it goes terribly.

Watch it for yourself here: 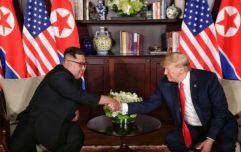 #TRAILERCHEST: The White House has made an actual movie trailer about world peace for Kim Jong-un

END_OF_DOCUMENT_TOKEN_TO_BE_REPLACED

Some of the most common answers include: 'Asia' and 'Africa', neither of which are countries...

It's important to note that they were given the opportunity to simply point out America, the country that they're from, but they couldn't even do that...

One lady even goes as far as to say: "Who knows stuff like that?"

But it's not all bad. A kid who looks no older than 10 saves the day, by being actually able to name a few countries, and point them out in the right place.

Maybe the future is bright. The present, however, not so much.

This isn't the first time that Kimmel has tried to put the intelligence of Americans to the test. A few months ago he asked people on the streets to simply 'name a book', and the results were exactly as bad as you'd expect them to be.

popular
Prince George reportedly told classmate "my father will be King so you better watch out"
Two new 24-hour bus services are coming to Dublin
Budget 2023: Cigarettes going up, energy credits announced, child and social welfare increases confirmed
Jeffrey Dahmer’s dad thinks he knows what’s to blame for son becoming a serial killer
An underseen disaster film is among the movies on TV tonight
CONFIRMED: Renters to benefit from €500 tax credit as part of Budget 2023
QUIZ: You won't get 15/15 in this very tricky Geography Quiz
You may also like
2 months ago
Six people dead after mass shooting at Fourth of July parade in Illinois
2 months ago
At least 46 people found dead in abandoned lorry in Texas
3 months ago
A crypto-themed restaurant is no longer accepting cryptocurrency as payment
3 months ago
Aer Lingus announces flash sale on flights to America this summer
3 months ago
Uvalde native Matthew McConaughey calls for gun responsibility measures following school shooting
4 months ago
Texas shooting: Gunman posted warnings on Facebook just minutes before shooting
Next Page