Entourage the movie is here. To say we're excited would just be a little bit of an understatement.

Here's what you have to look forward to when you head along to the cinema this weekend... 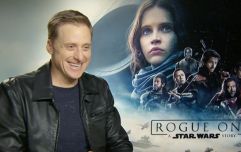 END_OF_DOCUMENT_TOKEN_TO_BE_REPLACED

The big screen version of the hit HBO series is smoothly sidling into Irish cinemas on Friday 19 June and, ahead of the film's highly-anticipated release, Lia Nicholls, of JOE.co.uk fame, headed along to catch up with the super-cool cast including Adrian Grenier (Vincent Chase), Jerry Ferrara (Turtle) and Kevin Dillon (Johnny 'Drama' Chase).

Lia also had a chance to pick the big brain of Doug Ellin, the show's creator who's successfully moved the hit series from the small screen in the corner of your Mammy's living room to that giant silver one at your local cinema.

Entourage is in Irish cinemas now.

popular
The Last Of Us Episode Five will premiere days earlier in Ireland and UK
One of the most underrated crime thrillers of recent years is among the movies on TV tonight
Amazon Prime Video has just added 21 big movies to its library
5 years ago, Hollywood took a massive gamble on a huge sequel... and lost big time
Shock as blues singer beats Adele, Beyonce and Taylor Swift to win Song of the Year Grammy
Ben Affleck's bored expression at the Grammys becomes a meme
The first reviews for Hogwarts Legacy are absolutely stellar
You may also like
6 years ago
EXCLUSIVE WATCH: Margot Robbie reveals the one thing about Irish men that makes her "go weak at the knees"
6 years ago
VIDEO: Chris Pine, Zachary Quinto and Sofia Boutella really love the smell of this mystery Irish jar
6 years ago
The Conjuring 2 director James Wan chats about filming in Ireland and Aquaman
6 years ago
JOE meets Jason Manford: "There’s only so many times you can hear ‘You fat bastard’ at a match before you stop smiling"
6 years ago
EXCLUSIVE: Seth Rogen and Chloë Grace Moretz chat about dead frogs, bulk-buying dildos and rolling joints really fast
6 years ago
The Russo Brothers, directors of Captain America: Civil War, chat Avengers: Infinity War, Spider-Man and Star Wars
Next Page