Ahead of the release of what is one of the most anticipated film sequels of all time, JOE and Club Orange decided to take a look at some of our favourite moments from fantasic funny woman Kristen Wiig, star of Anchorman 2: The Legend Continues.

Having already brought you our best bits from the 2004 comedy classic, we're now focusing on one of the sequel's new stars, Kristen Wiig. The very amusing actress plays Chani, the incredibly lucky lady lover of none other than Channel 4 News Team's Brick Tamland (Steve Carell).

It seems like he loves her even more than lamp.

The sketch show is, of course, a live broadcast, and sometimes Wiig doesn't always manage to keep it together. Here she is completely cracking up alongside Harry Shearer-soundalike Bill Hader and the always excellent Maya Rudolph:

END_OF_DOCUMENT_TOKEN_TO_BE_REPLACED

To most Irish viewers, Kristen Wiig is now most recognised as Annie, the star of the 2011 comedy hit, Bridesmaids. The film, which was written by Wiig and co-stars Roscommon native Chris O'Dowd, was a huge, hilarious success when it was released, with the Anchorman actress the stand out performer:

With her super silly stature continuing to rightly grow, Wiig has also been asked to present awards at high-profile ceremonies such as the 2013 Golden Globes, where she was in top form with Ron Burgundy himself and fellow Groundlings alumnus, Mr Will Ferrell: 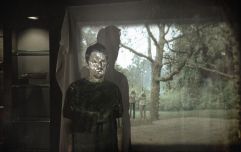 END_OF_DOCUMENT_TOKEN_TO_BE_REPLACED

And finally, a musical tribute to the sexy lady herself (and her epileptic dog) from Flight Of The Conchords, New Zealand’s greatest export since... well, we don't really like to talk about New Zealand since Ireland's recent heartbreaking, last-kick-of-the-game defeat.

You can win tickets to the Anchorman 2: The Legend Continues premiere in Dublin on December 9th by clicking here for the Club Orange Facebook page. What are you waiting for?