We had to wait for two hours into the show, but when it finally came, Lady Gaga and Bradley Cooper produced a show stopping performance of 'Shallow' at the 91st Academy Awards.

The performance lived up to the hype and in every way mirrored the movie from which it came in its epic and intimate nature. 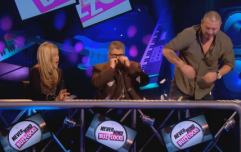 Five of the most memorable moments from Never Mind The Buzzcocks

END_OF_DOCUMENT_TOKEN_TO_BE_REPLACED

While Lady Gaga didn't win best actress because Olivia Colman took home the golden statue for her performance in The Favourite, she, along with Bradley Cooper provided the most memorable moment of the night.

The chemistry between the two actors and performers was palpable as they performed the song, with Cooper growing into the song after some early nerves.

Why yes I did scream “KISS!” from the balcony of the Dolby Theatre

Something major just happened. After “Shallow” perf, @ladygaga & Bradley Cooper exited stage for commercial break. During break, they came back to their seats from stage then audience gave them another standing o. I’ve never seen that happen for any performers. Cue embrace#Oscars pic.twitter.com/k9wNh66tn1

Soon after, Gaga won and accepted the Academy Award for best original song, to the roaring applause of the star-studded audience.

The Big Reviewski || JOE · The Big Reviewski with Y: The Last Man, that Malignant ending & a secret streaming service
popular
UK company adopts four-day work week so employees can focus on themselves
Aer Lingus announces flight sale as US to lift travel ban for vaccinated EU passengers
Cork City Centre described as a "no go area" after man pulled from wheelchair in violent attack
Larry Bass resigns from RTÉ board just one day after first board meeting
EY announces 816 new jobs across Ireland
The first ever foldable hotel room has been launched in Ireland
WATCH: Margaret Thatcher was briefly resurrected at the Emmy Awards
You may also like
21 hours ago
WATCH: Margaret Thatcher was briefly resurrected at the Emmy Awards
1 day ago
Midnight Mass review: Netflix's new series is a slow-burn drama ending in all-out horror
1 day ago
New documentary on the murder of Limerick man Jason Corbett to air on Monday night
2 days ago
Ranking Daniel Craig's James Bond movies from worst to best
2 days ago
The Big Reviewski JOE Movie Quiz: Week 120
2 days ago
One of the best war films ever made is among the movies on TV tonight
Next Page