Happy Birthday to the best to ever do it.

But enough about George Clooney, who turned 61 earlier this month.

Clooney isn't a part of The Late Late Show's 60th birthday celebrations, sadly, though they will take place this Friday night (27 May) if you're up for raising a glass or two to the enduring Irish institution. 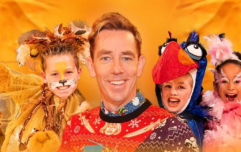 END_OF_DOCUMENT_TOKEN_TO_BE_REPLACED

It's the final show of the current season, too, so it's basically 'can't miss' stuff, right? So, who will be joining host Ryan Tubridy, then? It's quite the stacked bill, so let's break this thing down...

Oscar nominee Jessie Buckley will take a break from taking the world by storm to discuss her brand new album alongside former Suede man Bernard Butler, and there'll presumably be time to mention her new horror film Men, which hits Irish cinema screens on the first of June.

Beloved troubadour Dermot Kennedy will perform his new single 'Something to Someone' with the epic assistance of the RTÉ Concert Orchestra, while comedian Mario Rosenstock will "channel his inner Christy Moore" with a song to celebrate the Late Late's big birthday bash.

Elsewhere on the show, boxing world champions Amy Broadhurst and Lisa O'Rourke will show off their gold medals and provide some insight into their incredible achievements.

END_OF_DOCUMENT_TOKEN_TO_BE_REPLACED

Want more? Fair enough. Clannad’s Moya Brennan, Altan’s Mairéad Ní Mhaonaigh, Christy Dignam and Billy McGuinness from Aslan, Shobsy and Lyra will be on hand for some music-themed memories, and there may even be a special performance it says here.

And finally, birthday celebration wishes will play throughout the night from past guests such as Peter Kay, Imelda May, Cliff Richard, Michael Parkinson, Adam King, Conan O'Brien, Michael Flatley and Chris Hadfield.

You can get involved from a televisual distance on RTÉ One on Friday at 9.35pm.