This week is full of Irish heroes...

Christmas has arrived, and along with it comes another episode of the Late Late Show.

This week is full of Irish heroes of yesteryear and today, so it's sure to be worth a watch if you're staying in this weekend. 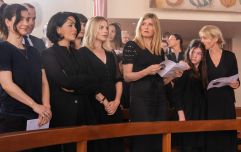 Apple TV+'s next big show is an Irish murder mystery

END_OF_DOCUMENT_TOKEN_TO_BE_REPLACED

The Ireland women's soccer team will be chatting to Ryan to discuss their record-breaking 11-0 win over Georgia this week. Ciara Grant, Saoirse Noonan, Denise O'Sullivan and Savannah McCarthy will be talking about the team and the possibility of World Cup qualification.

Westlife are back with a new album and stadium tour, so the boys are on the show to perform their latest single, 'Starlight'.

One week on from the Late Late Toy Show, DJ Calum and Hype-Man Jackson are back with Ryan to discuss their breakthrough performance on the show last week. The future of Irish clubland have received multiple offers for appearances since last Friday, including a slot on FM104.

Tom Grennan will be performing his song 'Little Bit of Love' which reached number 6 in the Irish charts over the summer.

And finally, writer and activist Orla Tinsley will be discussing the importance of organ donation in Ireland on the anniversary of her double lung transplant from an American donor.

A feel-good episode all around.

popular
QUIZ: Can you name all the countries beginning with A?
Elderly Irish man stabbed to death on mobility scooter in London
Here's how to make €9-11 on Revolut in just a few minutes
New car-free town with population of 85,000 set to be built in Dublin
Galway City Council street cleaners claim Lotto jackpot worth over €5.5 million
Dunnes Stores recalls children's pyjamas over suffocation risk
Articulated lorry driver in his 20s dies in Tyrone
You may also like
5 days ago
Thunderstorms and heavy rain to end Ireland's current heatwave
5 days ago
Record for hottest August day in Ireland ever has now been broken
1 week ago
Road Safety Alert issued as high temperatures continue across Ireland
1 week ago
QUIZ: Can you name all the counties in Ireland with an ‘N’ in their name?
2 weeks ago
QUIZ: Can you name the county that each of Ireland's 10 highest mountains are in?
2 weeks ago
Take a Hike: Crone Woods and Maulin Mountain loop
Next Page