We're not quite sure what to make of this.

Remember when almost every single conversation that was going on in your office was about Love Island?

It was less than two months ago, even though it feels like a long time ago. 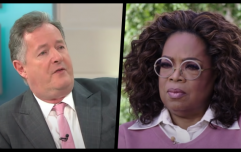 These are the most-complained about moments on TV in 2021

END_OF_DOCUMENT_TOKEN_TO_BE_REPLACED

The accents are pretty dreadful, especially the "Irish" lady, who we can only assume is trying to be Maura Higgins.

However, it does kind of sum up the show as a whole, with the narrator saying: "You will watch 50 hours of this. You think you won't, but you will."

But if you ask us, the sketch is not only about two months too late, but also quite rubbish.

Take a look here and decide for yourself:

It's not the absolute travesty that was the Saoirse Ronan sketch from last year, but it's not a great deal better.

popular
Varadkar: "There are two things we have to do... one is to bring wages up"
Galway named one of the top 10 best European cities to raise a family
BBC trainee accidentally posts message mocking Man United live on TV
Second doctor accused of sexually assaulting patients at hospital in Kildare
Bruce Springsteen announces two nights in RDS in 2023
Irish employment law experts warn employers must find ways for staff to take entitled leave
World's fastest passenger jet to take to the skies in 2025
You may also like
9 months ago
Belfast man ranked as one of Tinder's seven most successful UK singles
9 months ago
Love Island to air two hour special tonight as contestants clash in explosive episode
9 months ago
Here are the three Irish contestants entering Casa Amor tonight
10 months ago
Love Island hit with 1,500 complaints over contestant Danny Bibby
10 months ago
Love Island could be cancelled, "in the most serious of cases", if new measures not followed
10 months ago
Investigation launched after YouTuber breaks into Love Island villa
Next Page