So City have won the Premier League in style. They've adopted the Pep philosophy. They showed that over the course of the season they were by far the best team in the league.

But how exactly did they do it? Well, it looks like they'll be giving an insight in their eagerly-awaited behind the scenes documentary. 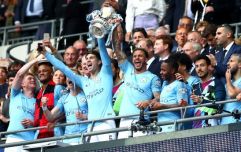 They're making a cartoon show about Manchester City for some reason

END_OF_DOCUMENT_TOKEN_TO_BE_REPLACED

All Or Nothing: Manchester City is the new documentary series by Amazon Prime and will launch exclusively on Amazon Prime Video in 2018.

The series follows the season of the Premier League champions and offers interviews with players and coaches, showing the week-to-week lives of those involved over the course of the season.

It will also offer looks at board meetings and other surprise moments across the course of the season.

Below is the first look at series which is coming to the streaming service soon.

The footage comes just a week after the first trailer for All or Nothing: All Blacks series was released. 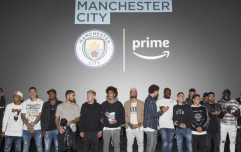 All Or Nothing: Man City isn't perfect, but it's a major relief from modern-day football coverage

END_OF_DOCUMENT_TOKEN_TO_BE_REPLACED

For the first time ever, the legendary All Blacks allow cameras to join them as they face the formidable British & Irish Lions in a showdown that comes around only once every 12 years and the battle for the 2017 Rugby Championship.

The series offers exclusive access to one of the most dominant teams on the planet, taking viewers inside the locker room, on the field, and into the lives of head coach Steve Hansen and the players.

popular
One of the best action movies of recent years is finally available to watch at home
The JOE Movie Quiz: Week 138
QUIZ: Give this General Knowledge Quiz a whirl
The JOE Friday Pub Quiz: Week 278
QUIZ: See if you can ace this General Knowledge Quiz
QUIZ: Can you name every Batman actor in three minutes?
Irish employers urged to "take time" when lifting workplace restrictions
You may also like
4 months ago
Manchester City's Benjamin Mendy charged with four counts of rape
1 year ago
Everton v Man City tonight postponed due to coronavirus outbreak
2 years ago
Here's how to get tickets to Coca-Cola's last Premier League roadshow
2 years ago
QUIZ: How well can you remember the 2018/19 Premier League season?
2 years ago
QUIZ: How good is your memory of the Manchester derby?
2 years ago
The Football Spin on Maurizio Sarri's problems and have Chelsea handed Manchester City the title?
Next Page