The insanely dark new comedy from the writer and director of Succession arrives in Irish cinemas this week.

The plot of The Menu revolves around a very select group of guests being invited to a tiny island-based restaurant run by a reclusive and intense chef (played to perfection by Ralph Fiennes).

Amongst the diners are a high-end food critic (played by Janet McTeer), her sycophantic editor (Paul Adelstein), a famous actor (John Leguizamo), his put-upon assistant (Aimee Carrero), a trio of douche-bro stockbrokers (Arturo Castro, Mark St. Cyr, Rob Yang), a powerful politician (Reed Birney), and central to us, the movie goers, a die-hard fan of the chef (Nicholas Hoult) and his date for the evening (Anya Taylor-Joy). 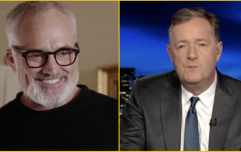 END_OF_DOCUMENT_TOKEN_TO_BE_REPLACED

Directed by Mark Mylod (director of 13 episodes of Succession, among many other CV entries), produced by Adam McKay and Will Ferrell (producers of Succession), and co-written by Will Tracy (who, yep, wrote some of the scripts for Succession), it isn't much of a push to say that if you liked Succession, you'll also like The Menu.

But much like that adored HBO show, The Menu works because the comedy is dark, and it makes fun of absolutely everyone on screen.

In the run-up to the movie's release, we chatted with Mylod, and you can check out that full interview right here:

END_OF_DOCUMENT_TOKEN_TO_BE_REPLACED

During the chat, in which we discuss the topicality of "Eating The Rich" which seems to be taking over Hollywood at the moment – see also: The White Lotus, Triangle of Sadness, and, yep, Succession – and which of the Succession actors has the biggest knack for on-the-spot improvising comedy, we brought up how The Menu takes aim at so many targets.

Specifically, from the critics to the fans, nobody can escape the punchlines being delivered here. The central conceit of focusing on lovers of food can easily be switched over to critics and fans of movies, music, video games, sport, any other particular passion that people might have.

For every medium that has never-happy critics and can't-hear-criticism fanatics, The Menu holds up a funhouse mirror and lets everyone squirm at the reflections.

We asked Mylod if movie and TV criticism and fandom presented an obvious parallel for him when making this project, and he told us:

END_OF_DOCUMENT_TOKEN_TO_BE_REPLACED

"Yes, very much so. It was a really fun [parallel] for me. And it extends beyond that. I hope that, as I do, that people see a little bit of themselves, for whatever their passion is.

"I'm convinced that I would be the greatest football manager in the world. Of course, my fantasy football score does that reflect that, obviously.

"But the mad fandom in all of us is illustrated, is channeled, through Nic's [character] quite wonderfully."

The Menu arrives in Irish cinemas on Friday, 18 November.

popular
Katherine Ryan says famous TV star is a ‘predator’ and everyone in industry knows
20 years ago, one of the best sci-fi movies of the 21st century was a box-office bomb
Surprise frontrunner emerges as potential next James Bond as producers 'love him'
QUIZ: Only the sharpest will get 100% in this General Knowledge test
Very popular US fast food chain planning to open in Ireland
The JOE Movie Quiz: Week 181
The JOE Friday Pub Quiz: Week 322
You may also like
5 days ago
Ireland AM star suffers 'double whammy' of slip ups live on air
2 months ago
WATCH: Bridge is officially opened... before immediately collapsing once ribbon is cut
2 months ago
Man explains why some guys don't show their girlfriends on their Instagram story
3 months ago
The Ultimate "That Actor From That Thing" Quiz
5 months ago
WATCH: Lightyear star reveals who'd win in a fight between him and Thanos
5 months ago
30 years on, The Simpsons writer confesses he misunderstood iconic joke
Next Page