Yet another big week for new releases, with SOOOOOOOO much new stuff to get through.

QUIZ: Test your knowledge of Gogglebox

END_OF_DOCUMENT_TOKEN_TO_BE_REPLACED

That is exactly what you'll find in the latest episode of The Big Reviewski, which can be watched in full below, or you can skip to the cinema reviews (6:05), home entertainment recommendations (15:45), and classic re-watches (22:50).

Here are the new cinema releases, which will all be available on the big screens around Ireland from Friday, 26 November...

END_OF_DOCUMENT_TOKEN_TO_BE_REPLACED

Ridley Scott tackles the true crime story behind the assassination of one of the Gucci family members, with the Oscar favourite decked out with an impressive cast including Lady Gaga, Al Pacino, Adam Driver, Jared Leto and Camille Cotton.

We chatted to Jeremy Irons, who plays Rodolfo Gucci in the movie, and you can check out that interview in full right here: 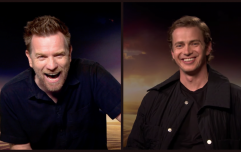 END_OF_DOCUMENT_TOKEN_TO_BE_REPLACED

Disney's latest animated comedy comes from the mind of Lin-Manuel Miranda, the genius behind Hamilton, and features a lady (Brooklyn Nine-Nine's Stephanie Beatriz) who is the only member of a small town who doesn't appear to have magical powers.

Marvel are coming for you, Mariah Carey!

The brand new Disney+ show puts Hawkeye (Jeremy Renner) and his new protege (Hailee Steinfeld) in the middle of a Christmassy action plot.

You can't help but think of Die Hard when you see big festive action like this. We reviewed the first two episodes right here, and they're both available to watch on Disney+ from Wednesday, 24 November.

We chatted to both Renner and Steinfeld about the new show, and you can check out that interview in full below.

THE BEATLES: GET BACK

Peter Jackson (director of The Lord of the Rings Trilogy) turns his hand to music documentaries with this three-part look at January 1969 when the Fab Four attempted to construct 14 new songs in preparation for their first live concert in over two years.

The documentary series will drop across three consecutive days on Disney+ this week on Thursday 25, Friday 26 and Saturday 27 November.

Halle Berry stars and directs in this drama about a disgraced MMA fighter who re-enters the ring in an attempt to face her demons, just as the son she gave up re-appears and wants to be a part of her life.

A CASTLE FOR CHRISTMAS

This is that, except set in Scotland, and set at Christmas, and its got Brooke Shields and Cary Elwes in it.

A Castle For Christmas is available to watch on Netflix from Friday, 26 November.

Rory's Pick - JINGLE ALL THE WAY

Celebrating its 25th anniversary this week, Arnie's bonkers Christmas movie might be the first one to watch this year to get your into the festive spirit!

Jingle All The Way is available to watch on NOW right now.

The original (and best!) version of the classic romance between a beastly castle owner and a local village lady, it is regarded as one of Disney's best ever movies. Do you agree?

Beauty & The Beast is available to watch on Disney+ right now.

popular
QUIZ: Test your knowledge of Gogglebox
Leo DiCaprio's only Oscar-winning performance is among the movies on TV tonight
Irish employment law experts warn employers must find ways for staff to take entitled leave
First photos emerge of Boris Johnson drinking at Downing Street party during lockdown
RTÉ's new show is looking for the best takeaway in all of Ireland
EXCLUSIVE: Ewan McGregor and Hayden Christensen on reuniting on the set of Obi-Wan Kenobi
You may also like
7 hours ago
One of 2022's funniest movies has just been added to Netflix
4 days ago
2022 looks like it will finally be Hollywood’s big coming out party
4 days ago
The spiritual successor to Roger Rabbit and 7 more movies and shows to watch this weekend
5 days ago
Netflix has just quietly added 12 big movies to its library
5 days ago
Derry Girls fans in bits following emotional season finale
6 days ago
Full update revealed on all future Star Wars movies and shows
Next Page