WATCH: Michael B Jordan's reactions to being told how good looking he is is amazing

Is it possible to love this man any more?

Michael B Jordan is on an absolute tear at the moment.

He is currently the main character in the new Creed movie, which you can read our review on here, and he played an absolute stormer as Killmonger in Black Panther earlier this year.

END_OF_DOCUMENT_TOKEN_TO_BE_REPLACED

But as amazing as he is as an actor, he tends to attract quite a bit of attention for his good looks too.

And while appearing on last night's episode of The Graham Norton Show, Jordan addressed some of the tweets that have surfaced that discuss his looks.

Some are absolutely bizarre.

One in particular read: "Does Michael B Jordan make anyone else wanna rip their lungs out and eat them whole? He's so babe."

Naturally, Jordan has absolutely no idea how to react to such a bizarre statement.

Have a look for yourself below: 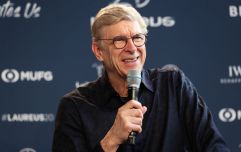 END_OF_DOCUMENT_TOKEN_TO_BE_REPLACED

Clip via The Graham Norton Show

Many viewers were also quick to point out that there was a tiny bit of flirting going on between Jordan and Cheryl Fernandez-Versini (formerly Cheryl Cole), who appeared as a guest on the show.

We can hardly blame her...