Leaving Neverland has already proved controversial, despite not being released to the public yet.

The Sundance Film Festival will play host to the premiere of Leaving Neverland; a new two-part film that focuses on two men as they recount their experiences of allegedly being abused by Michael Jackson.

Channel 4 will air the documentary in the spring, which has drawn comparisons to Surviving R. Kelly, based on initial reports.

END_OF_DOCUMENT_TOKEN_TO_BE_REPLACED

Set to have its world premiere in Utah tonight - Friday 25 January - Leaving Neverland highlights the experiences of James Safechuck and Wade Robson, who befriended Jackson at ages 10 and seven, respectively.

Now in their 30s, both men have contributed new interviews that "craft a portrait of sustained abuse" according to at least one review of the documentary.

In response, the Jackson Estate has dismissed Leaving Neverland as "yet another lurid production in an outrageous and pathetic attempt to exploit and cash in on Michael Jackson".

With contentious buzz developing, Deadline has reported that Sundance organisers and local police are stepping up their efforts in anticipation of fan protests.

“We have increased our staffing out of concerns for the potential for a protest,” Captain Phil Kirk of the Park City Police told Deadline, who go on to outline fears that an incident might occur inside the cinema during the screening.

Threats have reportedly been issued to director Dan Reed in advance of the event.

“Tensions are higher for this movie than anything I’ve ever seen at Sundance before,” said an unnamed law enforcement source. 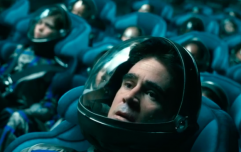 WATCH: Colin Farrell is in deep trouble in deep space in the first trailer for Voyagers

END_OF_DOCUMENT_TOKEN_TO_BE_REPLACED

“No one is going to be prevented from exercising their constitutional rights, but we are not going to allow this to get out of hand, in any way,” he added.

Security checks are expected at the screening, with similar measures being prepared for additional showings of Leaving Neverland this weekend.