Here are the 9 best movies on TV this Tuesday

Hey, it's the second day of the week.

And bring on the movies on TV.

Here's how it looks on Tuesday 11 February...

END_OF_DOCUMENT_TOKEN_TO_BE_REPLACED

One of the great bad movies of recent years in which Gerard Butler and Nikolaj Coster-Waldau do battle as ancient mythical super-beings. 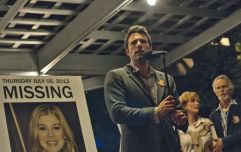 END_OF_DOCUMENT_TOKEN_TO_BE_REPLACED

This is always on, but Denzel Washington is absolutely electric so we're just going to keep on including it in this list.

Undeniably derivative but nonetheless enjoyable and very pretty sci-fi in which Tom Cruise discovers more than he bargained for in seemingly empty future world.

In which Reese Witherspoon's boots are made for walking.

The Big Reviewski || JOE · M. Night Shyamalan, Alex Wolff & Thomasin McKenzie talk about their new creepy thriller Old
popular
QUIZ: Ignite your brain cells with this testing general knowledge quiz
The JOE Movie Quiz: Week 112
1,126 new cases confirmed as Paul Reid warns Covid-19 hospitalisations are "rising"
The JOE Friday Pub Quiz: Week 253
Professor suggests Garda checkpoints at Irish border to halt spread of Delta variant
Sunshine and high temperatures to come to an end as Met Éireann predicts week of thunder and rain
The JOE Music Quiz: Week 67
You may also like
1 day ago
Two great new airplane-set thrillers to enjoy at home this weekend
1 day ago
Six big movies arriving in 2021 that we haven't got trailers for yet
2 days ago
These are the ten most-watched Netflix original movies of all time
3 days ago
Netflix's new true crime documentary explores one of Britain's most notorious serial killers
3 days ago
Love Island hit with 1,500 complaints over contestant Danny Bibby
3 days ago
Horror film Old has one of the scariest scenes you’ll see this year
Next Page