Not sure if that baseball bat is cheating...

Tekken is one of the great fighting game series. Ok, Street Fighter might still be the gold standard, but since debuting in the arcades all the way back in 1994, the Namco franchise has gone on to be one of the most enduring beat-em-ups ever. One of the first wave of 3D fighters, the unique one-button-for-each-limb system really resonated with players, and made characters like Law, Paul and Yoshimitsu beloved gaming icons.

The most recent instalment, Tekken 7, hit consoles in 2017. Alongside the familiar cast, there have been several guest characters from other games, including Akuma form Street Fighter,  Geese Howard from SNK’s The Art of Fighting, and Noctis Lucis Caelum from Final Fantasy XV. 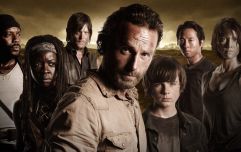 QUIZ: How well do you know The Walking Dead?

END_OF_DOCUMENT_TOKEN_TO_BE_REPLACED

Now however, the game is getting the first character from a different medium: Negan, the terrifying villain from The Walking Dead.

Negan first appeared in issue #100 of Robert Kirkman’s original comics series, and is played by Jeffrey Dean Morgan in the TV show. He’s known for his for his barbwire-covered baseball bat – normally, Tekken characters don’t have weapons, but Yoshimitsu’s always had his trusty sword, so Negan should have his bat.

The downloadable character will be available alongside five other new fighters as part of Tekken 7’s season 2 pass, which is “coming soon” according to Bandai Namco. The announcement was made by Tekken creator Katsuhiro Harada at fighting game tournament Evo, and was shown in concept-art form in a trailer, with classic Tekken characters Anna Williams and Lei Wulong also announced to be on their way.

Bandai Namco are no stranger to have multimedia guest stars in their fighting games. Soulcaliber II had Nintendo's Zelda and Image Comics' Spawn, and Soulcaliber IV featured Darth Vader and Yoda from Star Wars.

The Big Reviewski || JOE · The Big Reviewski with Andy Serkis, Squid Game follow-ups & the return of Succession
popular
New €140 million road officially opens today, replacing one of the Ireland's most dangerous roads
Expert wants 10 antigen tests delivered each week to every family this winter
QUIZ: Can you master this General Knowledge Quiz?
The cleanest towns in Ireland have been named
10 things I learned while rewatching the first two seasons of Succession
The JOE Friday Pub Quiz: Week 265
The JOE Movie Quiz: Week 124
You may also like
1 year ago
The Walking Dead is finally coming to an end after 11 seasons
2 years ago
Danai Gurira confirms she is leaving The Walking Dead
2 years ago
7 reasons why The Walking Dead went to hell
2 years ago
Walking Dead star will return to his role for a series of movies
3 years ago
The Walking Dead star Scott Wilson has died aged 76
3 years ago
The lineup for Comic Con Ireland 2018 looks awesome
Next Page