Horror fans will love this intense hidden gem on Netflix

Some excellent scares in this haunted house.

Indonesian cinema is having a moment.

We previously highlighted the incredibly violent crime thriller The Night Comes for Us, which boasted the talents of several recognisable figures from the Raid movies.

END_OF_DOCUMENT_TOKEN_TO_BE_REPLACED

Speaking of, both The Raid: Redemption and The Raid 2: Berendal remain two of the finest action movies of the past decade and deserve to be in the all-timer conversation.

The first of those efforts put the spotlight on actor and martial artist Iko Uwais, an incredible performer who has continued to shine even when in absolute dreck like Beyond Skyline and Mile 22.

Uwais also brought his skills - and fight choreography - to The Night Comes for Us and Headshot; another ultra-violent thriller where people meet pretty ghastly ends.

The link in most of this is a man by the name of Timo Tjahjanto.

END_OF_DOCUMENT_TOKEN_TO_BE_REPLACED

Before co-directing Headshot in 2016, Tjahjanto contributed the 'Safe Haven' segment to horror anthology VHS 2 and also got his hands dirty with dark thriller Killers.

Given his obvious love for the horror genre, it's no surprise that Tjahjanto has scored big with May the Devil Take You, which is on Netflix right now.

Released a few months before The Night Comes for Us last year, May the Devil Take You doesn't hold back on the gore either, but it's definitely more of a patient slow-burn affair. 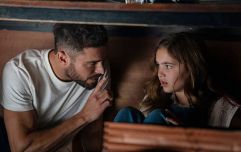 END_OF_DOCUMENT_TOKEN_TO_BE_REPLACED

The plot centres on a businessman who essentially sells his soul for fortune and fame, only for it to - shock horror - come back to haunt him and his family in horrible fashion.

The sins of the father prove especially traumatic as an already at-odds group find themselves involved in a haunted house survival battle that brings The Evil Dead to mind at times.

Indeed, the frights in this one range from creepy jump-scare anticipation, actual jump scares that feel more earned than cheap and some outright bloody carnage.

Tjahjanto clearly relishes putting his characters in especially intense jeopardy and though you might long for a bigger budget and tighter pacing at times, May the Devil Take you is a worthy recommend for any horror fan.

popular
Netflix has just quietly added 12 big movies to its library
Gardaí deny asking Cork shop to stop selling Animal Bars
HSE urges public to stop using popular e-cigarette
Wagatha Christie: Rebekah Vardy storms out of court just 30 minutes into final day
The 50 most iconic songs of all time* have been revealed
One of the greatest films of all time is among the movies on TV tonight
Viewers left emotional following Derry Girls finale special
You may also like
1 week ago
Netflix has just added 11 big movies to its library
1 week ago
New Netflix documentary about a nuclear accident scores 100% on Rotten Tomatoes
1 week ago
Netflix's new documentary Our Father is a properly nausea-inducing nightmare
2 weeks ago
The return of Mike Myers and 6 more movies and shows to watch this weekend
2 weeks ago
Netflix has just added 30 very big movies to its library
2 weeks ago
Dave Chappelle attacked on stage during Netflix stand-up show in LA
Next Page